February 4th
A day of two halves really.
The road South from Cusarare takes us to the “Batopilas Junction” from where the road forks, one route dropping a hair-raising over 1500 metres to the base of Baropilas canyon, the other leaving the Copper Canyon area behind to the East.
But first, the road and we must traverse the Copper Canyon - dropping over 1000m, before crossing a river bridge and ascending those same 1000m once again on the other side. I suspect one half of the day will be a lot bigger than the other…. In the sense that crawling up a one thousand metre wall takes a whole lot longer than zooming down one.
But zooming down 1000m - time for some grinning…
  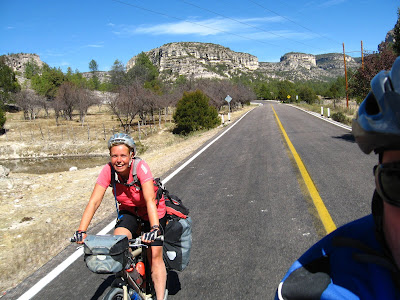 However, it’s never that simple. There are a couple of lesser drops and tough ascents before we get to the main chute down the Copper Canyon.
Some of the features on the way are just gargantuan. We spend an hour climbing towards this amazing rock amphitheatre and it’s just too wide for the camera to cover. The right side is a mirror image of the left as it stands separate from the rest of the land like a colossus. We ride between it’s jaws before the road swings away….
  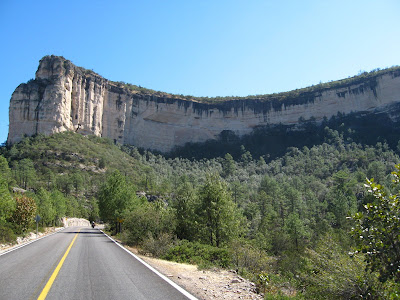 And behold the next cataract, another giant scar on the earth….
  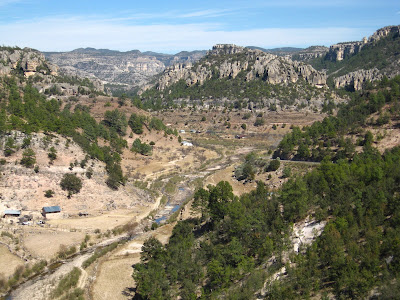 Then the road truly does start it’s final and decisive descent - the road a jagged slash across the hillside….
  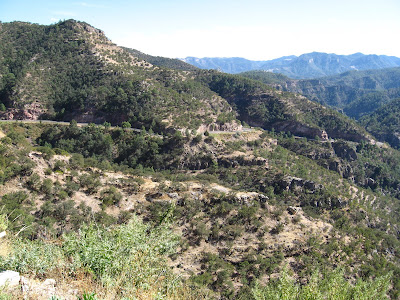 Sue pauses to catch a breath; and measure her surroundings….
  Suddenly we are at the bridge over the Urique River - the patient sculptor whose work we have been admiring, and in a flash it’s all over.
The climb begins in earnest….
But moving slowly brings it’s own reward. The way down is a blur of high speed zigs and zags. Crank the bike hard over, take the bend, grab some brake - woah - scrub off that speed, next bend, snatch a glimpse of scenery, set for the next bend….
Stirring stuff! Ascents allow for a more serene approach as vistas unfold at a more geological pace. At 3 miles an hour the world is slow to change and you can take it all in, and look back at the ever growing road behind….
  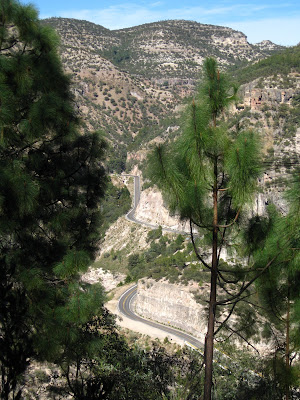 When finally, you have enough road behind you for this to happen…..
  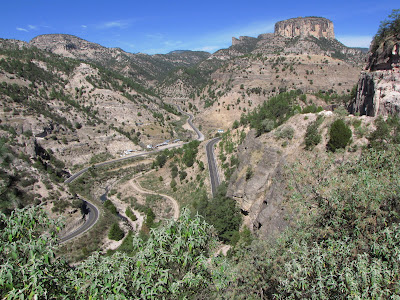 It’s been a big day in the world of the ciclista, and fine rewards are richly deserved by the conquerors of the Copper Canyon…..
So it is with a slight sense of  disappointment we find ourselves  in the men’s bathroom of a local petrol station for the night.... 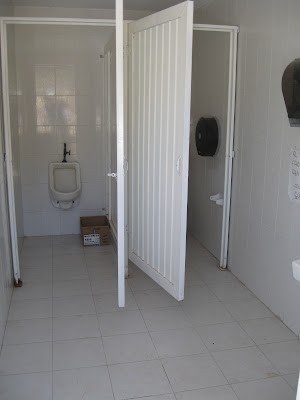 The town we were headed for looks like it upped and left when the petrol station closed down. Still the tent fitted perfectly inside, and when it’s minus a lot outside at night, you take whatever shelter is offered. Definitely got some strange comments from the security guards that found us there at midnight….
 
The next days ride grows steadily less spectacular as we leave the canyon system behind and the earth takes on a less tortured, but still big and beautiful look…. 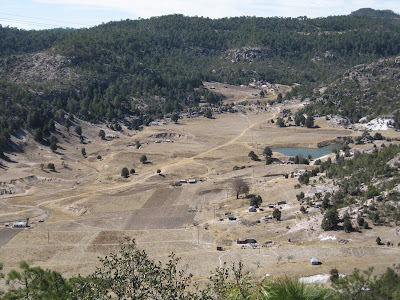  
We do get our reward when we reach Guachochi and splash out on a more luxurious room for a couple of nights of well earned rest…. Check it out - it’s even got carpet, the first we’ve seen since the US….
  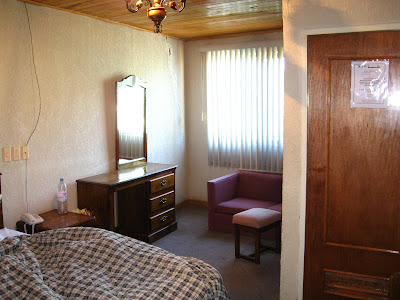 Posted by Sween in SAmerica at 5:25 PM