February 7th to 8th
Before Guochochi, the road forked, one leg down to Batapilas. It’s a 1500 metre descent down a twisty dirt road that meanders along the flattest bits of a precipitous canyon side. Batopilas is probably the next biggest destination for tourists after Creel and the canyon bottom is a sub tropical contrast to the warm days, freezing nights more common on the plateau above.
But we’ve had out share of canyons and of dirt roads too, so we take the road less travelled and leave Copper Canyon behind and head for Cowboy Country…
Now the land changes from harsh exposed rock and cliff edges, to open land of swaying yellow prairie grasses, and from pine to broad leaf trees. It’s big country….
  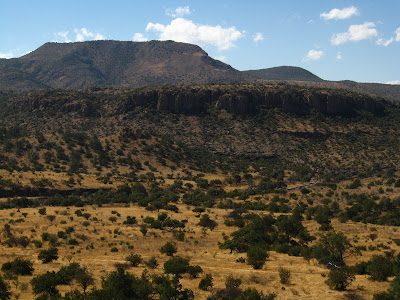 Steep climbs sneak between weathered boulders, glimpses of the next valley revealed between them….
  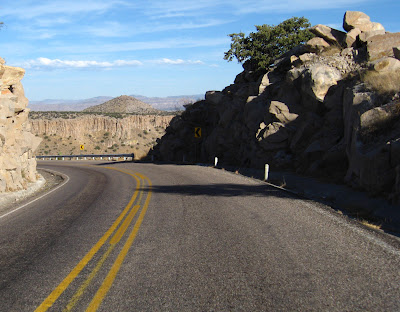 Then the world opens out before your eyes, and another vast land lies before you waiting to be crossed….
  Climb the next range of hills and look back over huge vistas…. 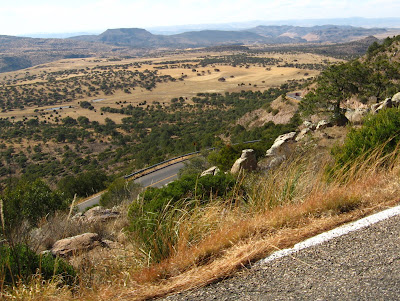  
Before the next world reveals itself…. 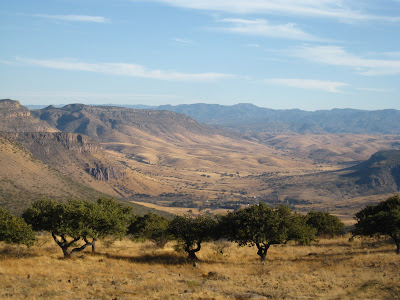  
It’s a process we repeat often over two days and 140 miles, each valley appearing the same on first inspection, but that’s just getting lost in the vastness. It takes a few moments to get a sense of scale and to see each valley’s individuality. It’s a joy to feel such a sense of horizontal space after Copper Canyon’s overdose of the vertical. This is cycle touring in a big country! You do move relatively slowly, but that just gives a very real perspective on the changing land around you. And a sense of scale as we crawl ant like, tiny dots on the massive.
Arriving in the last valley and finding a town feels like a real shock! Spending time, just you and the enormous landscape lends an alien feel to the hard edges of man made lines, square box houses marching rank and file up the hill. Hidalgo de Parral is our destination, but arriving still feels out of place….
Asking directions of the local law earns us a personal VIP escort in to town - cyclistas with motorcycle outriders no less… 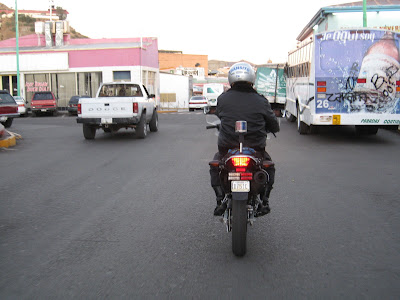 And the fabulous view from our hotel rooftop terrace does help to lesson that sense of shock…. 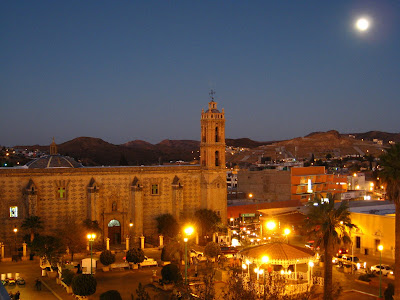 Hey Martin its Paul B from Pilkington

How's it going. Have you had any issues wih the Swine Fever pandemic on your travels?

And does Dave B know you are up at 1:21am on a school night?

Disasters do seem to follow me around. Was about 80 miles out side Mexico City when the news hit and they started to close everything. We were just heading into the city and had a quick change of plan.

We had to get a coach around the outskirts, and we're in Puebla now. They're just starting to close this place down now as well... so things are starting to look grim here too.

Not sure what the next move is - Peru, Argentina and some other countries have already banned flights here and the pesky French are trying to get ALL flights banned. I dunno - it looks like I may never get back home to work ever again...