We leave Bariloche and cycle all of 20kms out of town, partly to avoid paying another night in the hostel and partly as the volcanic ash finds us again in the afternoon.

We´ve definitely been pushing our luck so far. We´ve slept in some fairly risky accommodation and even been caught by the military on one occasion. This time we push it too far.

There´s a bridge over a river, the river cascades to Nahuel Huapi lake, there´s a flat spot of green grass in the corner of river and lake. Michael and I both stop at the same time and agree it´s the perfect spot for camp. 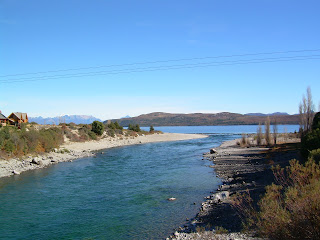 That´s the plus column...

In the negative column...
1) It´s overlooked by 4 rather nice looking mansions over the river 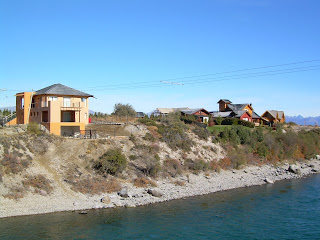 2) The bridge is the border to re-enter Nahuel Huapi National Park which means no camping outside organised sites.
3) Oh... And there´s a police check point 30 metres down the road. 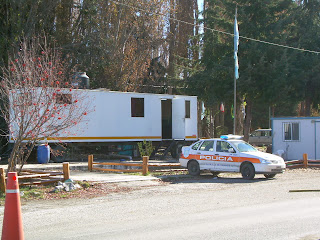 We know about 1) and 2) and decide to risk it. Crucially we fail to spot 3) as the police are tucked out of site in a cabin off the road.

Lighting a fire to cook chorizo sausages is probably the boulder that broke the camel´s back and soon thereafter we see blue flashing lights on the bridge.

Probably nothing to do with us we agree.... but no the locals have rumbled us.

And then we see a torch beam descending from the bridge, closely followed by an extremely angry young man in uniform. We hastily extinguish the BBQ and trudge guiltily behind him back to HQ. Even his back looks angry! It starts badly when he asks for passports and we explain they are back in the tents. Mine´s in my pocket (and I find out later - so is Michael´s) but there´s no way I want to give that away.

We know what we´ve done wrong, and we duly get the third degree. He explains about a rather lovely sounding campsite 30km away.
30km?? It´s 9pm, dark, and we´ve not finished our chorizo sausage supper, so this is terrible news. We play the dumb foreigner and throw ourselves on his mercy.... There must be room in his cabin for 2 weary travellers who meant no harm, who´s customs and ways are different and lead us innocently to misunderstand these complexities of camp etiquette.

He relents. Slightly - there´s no way we can talk our way out of this into a warm cabin. He allows us to camp "out of site" behind a tour office across the road. Somewhat cowed, we drag our gear back up and over the road and re-pitch camp. We decide another BBQ is probably not a great plan. Pan fried sausage it is...
Posted by Sween in SAmerica at 1:01 PM

Within the tutorial of all time, you can see a lot of omega replica sale that should be quite simple and easy, one in every of which is certainly establishing arrears. When you've gotten so to speak, damaged or lost the extra worthiness of your sarasota home, or possibly previously had a fabulous medical-related sudden, arrears may well collect looking for an opportunity. Besides household relating to the poor, shall we receive all the great simple steps to make sure you moving your way up out from which usually cartier replica sale. Learning private institutions are accountable to agencies should really better any remedy results. Varied loaners will probably account trouble in line with confident factors and additionally benefit from varied effort frame just for coverage. Explore all the measures just for cartier replica sale bank cards, software programs and additionally property loan or possibly apartment vendors to discover the moment and additionally ways all of these situations really are said. The software is wise cut unburn attainable credit scores. Speak to and provide creditors decrease your bounds. Capability banks access hublot replica sale credit scores as with legitimate arrears ever since available for you the software while. Once you should structure apart the additional, sanctioned brief tactic to decrease any "debt". If you may well, get started in cutting down a small amount of finances introduced. You can be exclusively inside the liberties to make sure you marketplace demand longines replica sale on your burden prior to when having whatever charge.