We stock up. 9 days of cyclist food weighs about the same as a small horse and we debate about hiring one to carry it. We decide we need food to gain energy to carry the food. I see a rather problematic viscious circle developing here....

So to Roger´s place. Express Restaurant on the main street. 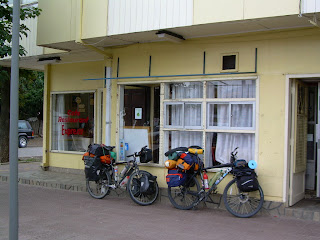 Michael and I have already eaten today (several times), but maybe a last snack for the evening.... The burgers are 4000 pesos (about #4.50), but Roger wants to talk and learn some English and he´s a really nice guy. So after a while we haggle a takeout price of 1000 pesos. A bargain and we order 2 and a beer while we wait.

Roger still wants to talk and next thing - like a magician he produces 2 steak dinner plates from under the bar and invites us to sit. Somewhat confused we agree and eat what I think was probably his and the waitresses dinner.... I feel guilty.
Well almost - it´s delicious.

After food he insists on praying over our travels and we huddle in the middle of the restaurant while he invokes strange powers. It´s quite a scene....

And he won´t take money for the food. God it seems does indeed move in strange ways....

We leave full, happy, and blessed (with 2 burgers). To celebrate we spend the money on a litre of ice cream each.

I put this down as a good day and many thanks go to Roger.
Posted by Sween in SAmerica at 10:12 AM