We need to cross the border and cycle just 15kms to Chile Chico to catch a ferry across the lake. No problem. Except we ask several different people about the ferry times and get the following "3pm", "4pm", "not today", "not tomorrow"?. We ask the price and get the folowing "30 US dollars", "15 dollars", "very expensive", "25 dollars". We also get told there is a 13 dollar charge to use the road??

I´m starting to realise that Argentines give misinformation about Chile and vice versa - they are not on the best of terms and border towns can be tetchy. We surmise that the ferry goes in the afternoon, costs less than 15 dollars and the road might just be free - like the other 1000 miles so far!

We settle in for a little tent fixing and a long leisurly 4 course breakfast - eggs, cereal, toast, porridge with Julian another crazy American who´s WALKED from Ushuaia - now that´s crazy. He teaches us to fish and gives us some hand made lures... 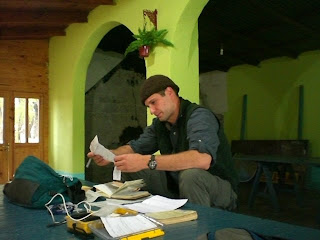 And then Martha - the kleptomaniac turns up looking distinctly guilty. We decide to give her a hard time, partly because she´s the number one suspect in the sock investigations, and partly, I admit just for sport - she´s not a nice person. She cracks in a most amusing way and storms out.

Not so amusing when the police turn up 5 minutes later. Martha accuses us and Carlos of going to hit her, plus victimisation. It´s all getting very entertaining when the site admin get involved as well - I just watch and play the dumb foreigner (an easy part, I admit), No entiendo - I don´t understand, but it´s clearly emotional. I debate about getting the camara out, but decide against it.... it might not go down too well with the cops.

I get the low down from Michael later - "Sticky Fingers Martha" who has also been impersonating a site worker is to be evicted and Carlos´s who dog turns out to be a stray he adopted is also evicted for eating too many tents - he got Julian´s as well.

We decide not to take up the offer of free accomodation and leave for the boat.....
and miss it by 20 minutes. It did go at 3pm - 3pm Chilean time which is an hour behind. We would still have made it but Michael got a puncture on the way, but at least it does go tomorrow.

We camp in the municipal site which is amazing complete with BBQ pit. Mmmmm steak and chorizo. 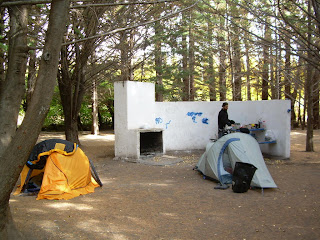 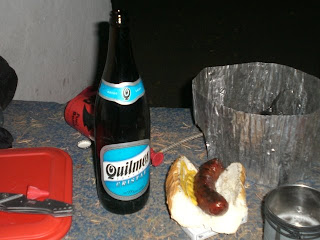