Well the weathers changed. It was light rain when I pitched the tent.
This was the camp in the morning. 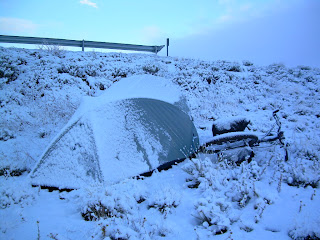 I think Autumn lasted about 4 minutes before winter set in.

I got up early to try and beat the wind, and get to El Calafate, and it was just too quiet when I woke. I now know snow is a good sound muffler. And it´s cold as well. But I already knew that.

The snow was coming in horizontally on strong winds, and after 4 hours in the tent waiting for a break in the weather, I just had to break camp and hope for the best. I really didn´t want another night by the road in this weather.

By the time I had packed up the wind was back to full strength and the snow was coming in horizontally. 5 upper layers of clothes, 3 for the legs, 3 pairs of gloves, 2 hats, cycling hard and still cold. How can that be?

I made 14 kms in 2 hours and had set solid as a cycling shaped person with helmet icicles when 2 guys (Louis and Carlos) in a mobile home stopped and peeled me off the bike. I didn´t want to take lifts, but this was getting serious. They were going to El Chalten (my next stop after Calafate), but they had hot tea, so I went El Chalten instead.

This is the oldest mobile home in the world. 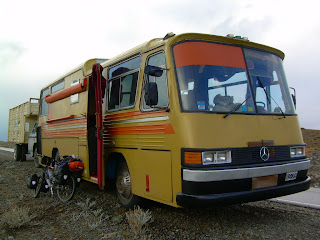 Comedy moment 1 when Louis dropped his phone and all 3 of us tried to grab it before it fell down the boot sized hole in the floor where the gear shift goes through. 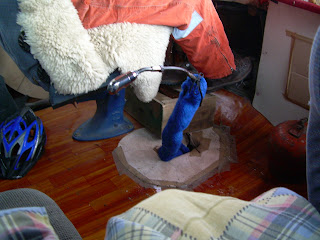 Comedy moment 2 when the only working wind screen wiper dropped down and started polishing the front of the bus.

But I am oh so grateful to these 2 guys. Thanks Louis and Carlos. 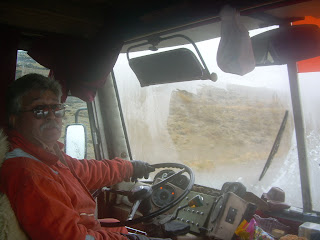 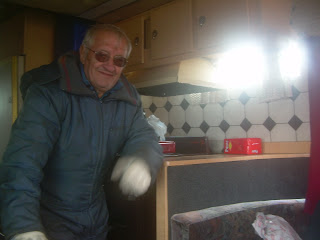 Note gloves and coats - no heating in this old boat, about 2 degrees inside but it felt warm to me.
Posted by Sween in SAmerica at 10:26 AM

Chill baby. I never even mentioned I had run out of water (my mum reads this blog) and anything I could find was too muddy for my water filter - it just kept blocking up. At least the snow solved that problem ;-)

Met another cyclist in Chalten so I should have some company now which gives a safety margin as well. But it´s getting interesting.....

Sween! Im resting in Mendoza for a couple days... we gonna be moving on towards Salta on Monday. Really enjoyed the Mendoza pass pics! Theres no escaping winter here is there ;) It all looked amazing... keep rolling dude, looking solid.