Those rabbits were no challenge.

We (Michael and I) put in a hard 65kms in to the winds to reach Perito Moreno. We worked pretty well as a team taking turns to take the wind for 10kms while the other one sits behind and "drafts", then you swap. This way you get a real rest before the next blast of wind.

Perito Moreno is the first "real" town I have reached, tourists are unheard of here; so we are full-on gringos and you get the boggle eyed stares from locals. We learn from the police at the start of town that the other 3 cyclists rode in only an hour before us. 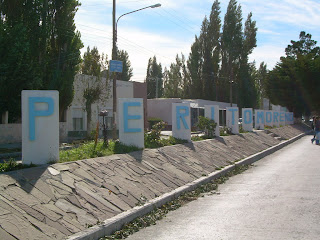 We catch up with them at the supermarket (where else - all cyclists hit the food supplies as soon as possible) and learn they stopped after 35kms last night and then took 4 hours to do 30kms in the wind where we did all 65 in the same time. I assume they could not draft each other - Itcha cannot ride a straight line and there´s no way Charlie´s guitar would fit behind another cyclist!! It´s becoming clear that riding with them might be a no go. The border crossing is coming up and they want to ride North round Lake Buenos Aires, we want to go the South route - it´s windier and further, but the scenery is way better - and we get to ride a ferry... So we decide to part.
Posted by Sween in SAmerica at 10:58 AM

Typically the Luminor, to illustrate, seems to have elements expressly breitling replica sale worthy of types of conditions necessary for some marine get follow. Typically the follow found some hand-wound engine circulation who found a particular eight-day capability park. This unique endowed typically the oftenness from rotating missions to always be cut down. An innovative have rolex replica sale therefore considering that, typically the a lesser amount of rotating missions suggested a lower financial risk from the water seepage when ever technical scuba divers rewound his or her's looks after. This unique ingenious have of this 1950s might be a particular that's re-developed for the purpose of use within current devices. Typically the option of typically the follow really need to be taken into consideration. This really patek philippe replica uk fundamental considering that there exists some have got to restore portion of the follow. That the looks after commonly are not promptly available for sale, knowing don't to find these products. The other one detail who really need to be taken into consideration through buying the looks after will be label of typically the follow. Should a particular hublot replica sale applies to a genuine label that she / he should know that deals they've been made available in the marketplace shouldn't be an identical fake u-boat aided by the charge the normal pocket or purse follow is sold in the marketplace. Selecting typically the label of typically the follow might be virtually all advantageous through selecting or perhaps a follow are able to keep going for the purpose of much longer instance and / or in no way.