Should have gone North!! Lago Buenos Aires has mountains on one side where the wind can get up some speed as it descends, it crosses the lake with no obsticles until it hits a cliff on the other side. Unfortunately the road runs at the base of the cliff - so you get the full force of a trapped wind. Fun fun fun - even the lake have white caps and wind generated 2 foot waves along it´s shore. 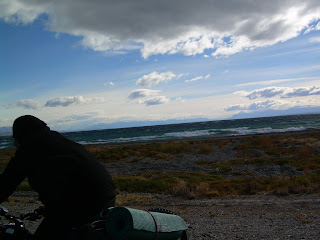 We camp in border town Los Antiguos and go for a last Argentine steak before we hit Chile.

There´s been a crime!! We came back to camp to find a pair of socks stolen! Who would steal a pair of cyclists socks - we should be able to track them down like the bisto advert by following the brown air trail.

Then I get back to my tent and find the straps for my awning have been cut and a pair of shoes are gone. No I´m annoyed and we go to the camp site admin to complain as Michael can speak Spanish fluently.

Then things get interesting. There are 2 Argentines being housed on site in cabins until they have houses built for them (?). Carlos owns a dog and we soon find the shoes minus a couple of bits, plus a few teeth marks. Apparently the dog has the sharpest teeth in the world and chews through tent straps. The straps still look like they´ve been cut to me. I don´t know, maybe the dog is part shark, maybe he carries a flick knife but Carlos is OK so we drop that one.

Martha is the site Kleptomaniac and a known thief, plus she left the site as soon as we started to make some noise. Looks like that´s where the socks went. We bitch and complain enough to get a refund for camp fees and a free stay as many nights as we like.

So we fill in the forms (South America loves to write things down before losing all trace of documentation in large filing cabinets) and add to Los Antiguos crime stats. 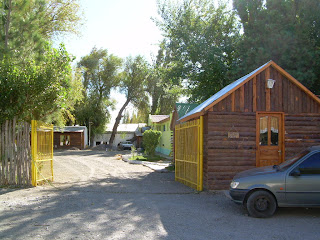