Friday 14th
Not moving today. No legs left. The wind wins. And I don´t care about admitting it. 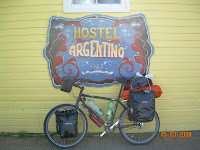 Chance to catch up with some other cyclists here as well and get some route tips from old salts. Ethan and Brook if you are reading - RESPECT. These guys are riding road bikes with skinny tires, Brook with a carbon fork, on the Carretera Austral.

To non cyclists that means - Insane.

Or to use more words, something light, built for speed, and prone to shattering if stressed or chipped, on roads made out of what you get when you demolish a building with a wrecking ball.

And the industrial strength footpump! Must have weighed 10 lbs, doubled as a weapon, and I now know was christened "Pete" by some other American cyclists I later met who thought you were equally insane.

Starting to discover "the club" now as people you meet have all met other cyclists going vaguelly the same way. You get news about where they are and hear rumours of their adventures. Met Cesar, another American who had actually heard about me from people I´d met on the road and was trying to catch up so as to hike together later in Chile. Weird world.
Posted by Sween in SAmerica at 3:48 PM