Another late night sampling Mendoza´s finest and toasting Dani´s arrival on the team sees us leave late the following morning. Cycling out of cities with hangovers is becoming a bad habit and we think Dani is having second thoughts about joining us as he worries over an invisible "fault" in his wheel rim. We convince him he has no option.... and we ride.

Salta we reckon is about 1000km North over a couple of tough-ish passes, but generally an easy ride through wide valleys.

Or so we think. Should have spent more time reading maps than drinking wine..... And more time looking over Dani´s suspect wheel rim.....

Day 1 starts well as we clobber some distance and we make 120kms on endlessly straight Route 40 despite bad heads and late starts.... The cycle gods are also smiling on us as I find a horseshoe in the road to Christen Dani´s bike with. This completes the set sported by mine and Michael´s bike after collecting from the world´s dumbest horse and Dani officially joins the team.

Day 2 is less auspicious as we make an easy 40kms before that "invisible fault" in Dani´s wheel becomes all too visible and we are in trouble as a large split appears.... 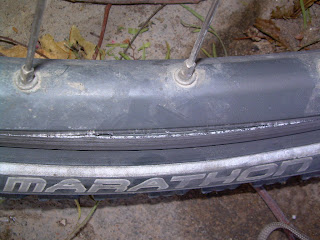 He hitches a ride and we meet him at a bike shop in tiny Villa Aberastain.... which is closed for the next 4 hours due to siesta.... 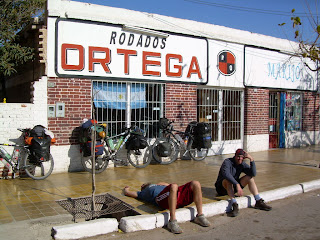 And then they don´t have the right rim!

So we ride at lame horse speed 14kms to Rawson on the edge of San Juan.... Which by chance turns out to be the cycle capital of Argentina, hosting race meets every weekend for a 6 month season every year. The cycle gods provide again as we find a shop that can fix him up.

Michael and I look for accommodation while Dani is re-wheeled and are told about "an adventurer" Padre Victor at the local church. Bemused we investigate and are offered free accommodation in the church from a man who travelled over the Mendoza pass ON FOOT. Next year he cycles Ushuaia to Rawson, about 2000km in one month. 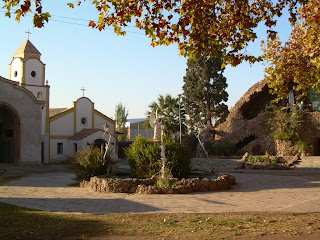 Day 3 Padre Victor insists we accompany him on a city tour in his 4x4 before going to a friends house for an asado (BBQ). Arriving we see the Parilla (grill) loaded with about 5kgs of steak and 5kgs of chorizo sausage and nervously wonder how many people are coming. It turns out to be only 3..... Us, and we cheerfully put away half a butcher´s shop between us, plus a couple of bottles of industrial strength home brew wine. Many, many thanks for a unexpectedly fantastic day... 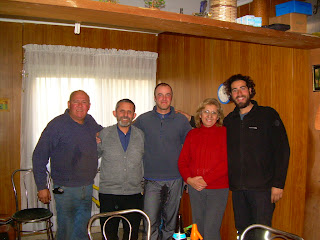 We finally wobble bloatedly away and manage a meat fuelled 15kms to camp outside of town to manage 175kms in 3 days. Salta is a long, long way away at this pace.

On the bright side Victor promises to phone 140kms ahead to a friend - Padre Orlando in San Jose de Jachal - the next town and our next accommodation looks secure. Suddenly we are on a holy mission!
Posted by Sween in SAmerica at 12:30 PM