The Pass to Mendoza 5

The road finally opens at 2pm, but we are still not allowed to ride. There is ice on the road and the Caribineros refuse to let us pass as there is too much traffic built up by now. We have to hitch a ride and are hauled ignominiously past the check point in the back of a 4x4.

We get out of sight of the Caribineros and ride the rest of the route. It´s breathtaking. Literally - the air is thin and both breathing and progress are laboured. 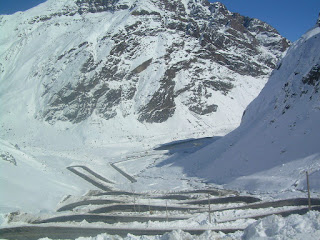 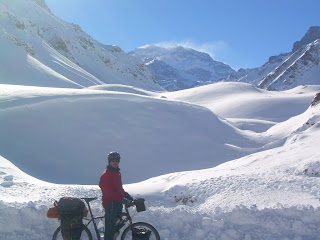 Passport control is torturous as the queues are huge and it´s freezing. We don all our clothes for the descent. Which is just gorgeous in clear blue wintery sunlight.

Faces freeze in the thin brittle air made hard with ice. 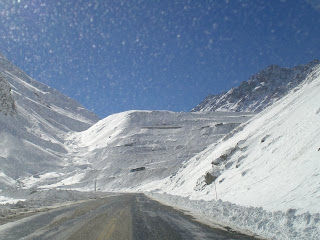 It´s getting late in the day after delays at the check point and we are delayed further 30kms on by caribineros who insist we are missing an official stamp. We refuse to cycle back to the frontera and wait anxiously for results of phone calls, before finally being ushered through.

Reaching a small town (Polvaredas) as the sun begins to set we enquire about accomodation and are told to ask at the local school. We meet Maxi an IT professor and the school principal Emilio, who immediately invite us in in yet another display of enormously humbling hospitality. 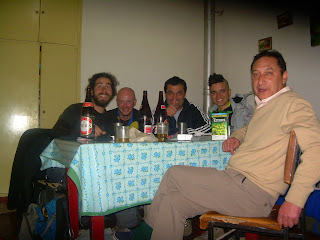 We pass the night drinking with them and playing table tennis until 5 in the morning and have yet another wild impromptu party night. We sleep in a dormitory before being awoken 3 hours later by a bleary eyed Emilio. The screams of school pupils is piercing and hard on sore heads as Emilio and Max struggle to start a new work day. Thanks so much to both - we had a great night...
Posted by Sween in SAmerica at 10:31 AM

What the hell did you do to the kid??

Glad you got practice for a table tennis tournament in Salta... we're taking you on!

actually it was very funny. the kids on the school couldn't stop lauching on the next day, when the director presented us to them.
we had such a great time on polvaredas.
bráulio