But back in time to San Martin.

San Martin de Los Andes - reminds me of Bariloche, just in miniature - upmarket and touristy. Except it is raining hard here and road and pavement are covered in a couple of inches of water.

Take a simple Italian idea - the humble pizza and ask an Argentine to improve it and you come up with something pretty special - the ultimate pizza.

Recipe
Take an ordinary italian pizza and throw away that useless dough base, keep the cheese, sauce and herbs. Next replace the dough with an inch thickness of juicy steak to create "Ma Tam Bre de la Pizza". Serve as a 12oz slice with fried tomatoes and onion in a beautiful tree filled Plaza. Now that´s a pizza....

I am turning in to a fair weather cyclist. It´s rained constantly now for 5 days. Proper rain - the stuff that bounces off your head and the roads run muddy rivers. I did get packed and ready to go in the morning, but just "gave it an hour" to see if things improved. For 5 hours. Bored. Nothing improved. Apart from the company. 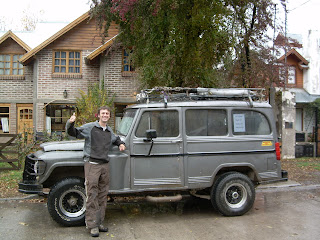 This is "Bim" a crazy guy from Holland and his 41 year old Argentinian 4x4 tank made by Altovista. He had no Spanish when he bought it in Chile, so had no idea what he was getting into. Never saw a guy look so happy when he tells you another story about yet another time something broke. He had a lot of stories! He´s no idea whether he´s travelling legally, but he´s been getting away with it for 8 months now.... Bim Buen Viaje! 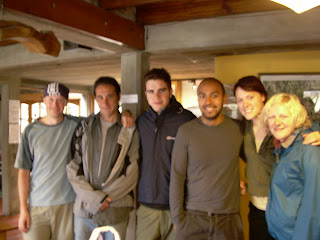 We just got drunk and had a really good night in the hostal.... Thanks guys! And hopefully see you again in the north where the sky has a sun and the wet stuff falls elsewhere...
Posted by Sween in SAmerica at 12:59 PM