Mendoza is a beautiful city! Set in a warm valley, surrounded by vineyards, and overlooked by the now distant Andes to the West, it is the best possible place to recuperate and thaw out after the freezing mountain pass. A glass or two of the local brew helps this process along nicely....

Walking around the city, one notes the broad tree lined boulevards and massive central plaza, a contrast to other Argentine cities so far. The explanation - a massive earthquake in 1861 which levelled the place. Upon rebuilding it, planners included huge plazas (space for evacuations), and wide avenues to allow room for buildings to collapse into. The next earthquake is yet to arrive....

Mendoza also contains the largest urban park in the whole of South America and it´s a gem. Park General San Martin is a huge 1000 acre area housing 3 sports stadiums, including the site of Argentina's 1978 world cup win, forests, museums, a lake with an island, a camp site, tennis club and a small mountain with great views of the city. Beautiful.

After meeting up with Maxi - the professor from the school where we slept in Ponvaredas who works weekends in Mendoza, we spend Braulio´s last day before he takes the bus back to Santiago exploring the park. Madeline from our hostel joins us. 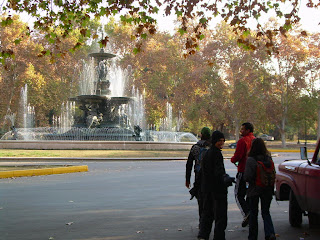 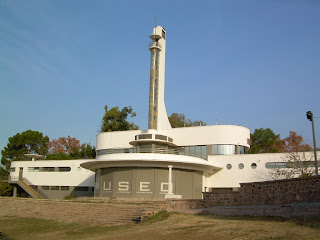 Painting from the Gallery of Modern Art 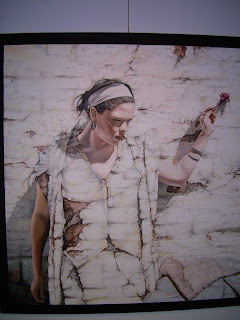 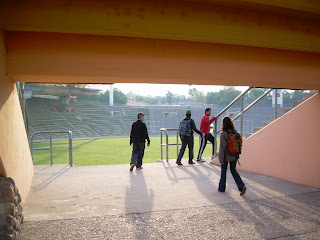 Sunset by lake and rowing club, distant Andes in the background. 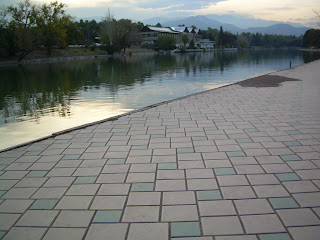 Michael with Madeline "Strange" and Maxi. 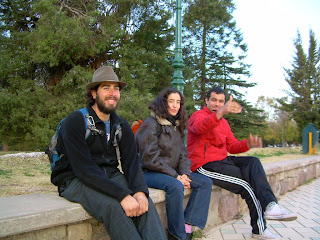 I met Dani as I passed through Pucon in Chile, he´s another cycling legend from Germany and veteran of tours of Scandinavia, Mongolia, New Zealand, plus others. We meet up again in Mendoza after he scales the mountain pass alone from Santiago that we just climbed as a 3. We agree to ride out of Mendoza together to Salta in the arid North, and then on to Bolivia..... if he can put up with our singing on the way.... The team is back up to 3 as Braulio bows out and Dani joins the crew. 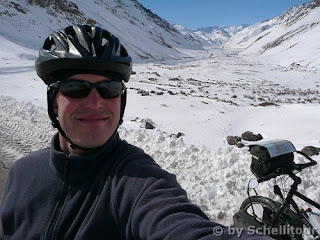 Tomorrow, WE RIDE NORTH!
Posted by Sween in SAmerica at 11:23 AM

Email ThisBlogThis!Share to TwitterShare to FacebookShare to Pinterest
Labels: Argentina