We had planned to ride Guatemala with Anna and Ali who we caught up with in Xela (pronounced Shell-a), however a family bereavement forces them to return prematurely to Holland. Our day at Fuentes proves to be our last together for a while and our thoughts are with them as they leave. They have had an awful run of luck lately and deserve better in the future.

On the road there are a couple of steep climbs out of Xela towards San Christobal and Quatro Caminos (4 ways) where we rejoin the Pan American Highway and head south east in to the teeth of the Sierra Madre mountain range.

The landscape here is volcanic. We are leaving 3 huge volcanoes behind at Xela and there are 3 more surrounding the 100 square kilometres of Lago de Atitlan. It’s brutal, tortured terrain and we cross a 3670m pass on route. It all starts fairly benignly as we cross a wide plain, but the backdrops are spectacular - tall peaks menaced by brooding grey storm clouds… 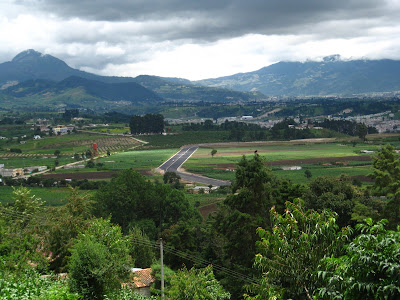 Minerals from volcanic ash is hugely fertile and the rains keep everything a rich emerald green during the rainy season…. 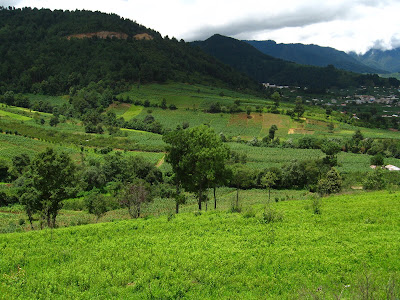 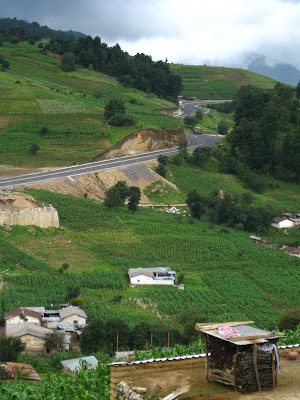 Sue thinks there might be a spot of rain… 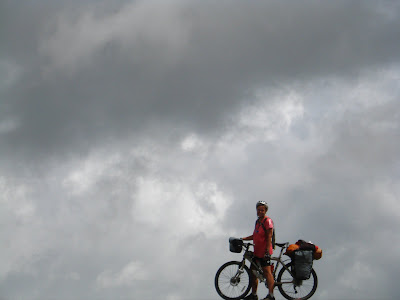 And soon after, we ride through skies turned to water and get a thorough soaking. The air cools noticeably as the heat of the day is washed away and any heat generated by our climbing is finely balanced with the chill in the damp air.

Then, as quickly as the storm arrives, it races away across the valley and we are treated to a distant light show as leaden skies are ripped by forks of lightning…. 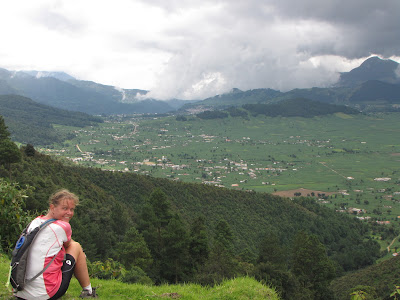  
It’s a watery scene left behind as fields of crops defy gravity to avoid sliding down the hillside….
  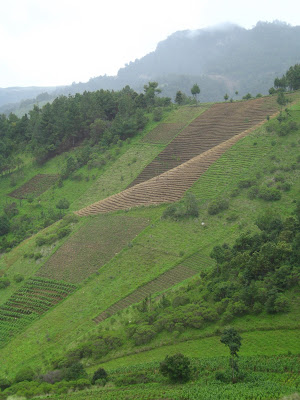 Finally we cross the pass and the road rolls dramatically over the top. What goes up….. 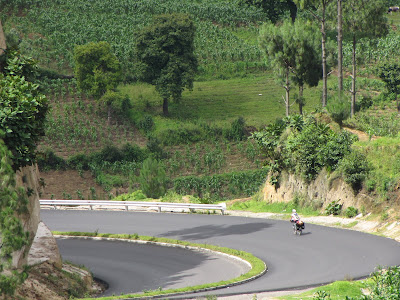 In a series of blindingly fast bends we test our tyres on the rain slicked surface in 10kms of pure joy.

Exhausted we reach Nahuela, a small indigenous Mayan town about as far off the gringo trail as it’s possible to get. Things do not look too promising when we arrive and are confronted by a group of men outside a cantina or local bar. Slurring and swaying with blood shot watery eyes, it’s difficult to understand what they say, but gestures are universal and it’s clear they are begging for the price of their next drink.

I check the first hotel and it’s obviously overpriced with a smell of urine from communal bathrooms that makes your nostrils constrict in protest. Asking around reveals that the only other place in town is above the cantina. Yes - that cantina, so bravely I step over the girl passed out in the doorway and pull back a curtain to enter the place. It’s a mistake as I am immediately accosted by several locals who surround me and set about trying to kill me by breathing in my face. The local firewater here has to be diluted with petrol - it’s the only way to take away that nasty aftertaste.

The bartender, who obviously understands the dangers of drinking is safe in his cage and I politely ask about the room through thick metal bars. Suddenly I come to my senses and wonder what I am doing. I tell him never mind about that room….

We’re too exhausted to leave town after a day spent climbing and after the cantina the other hostel suddenly looks just fine. I buy a fresh round of “mind rotter” for my new pals in the bar so that I can leave in one piece and do just that - quickly.

This is the better of the two places and the room is just large enough for a large single bed and 2 bicis. It’s just a shame this photo is not scratch and sniff to reproduce the full ambiance…. 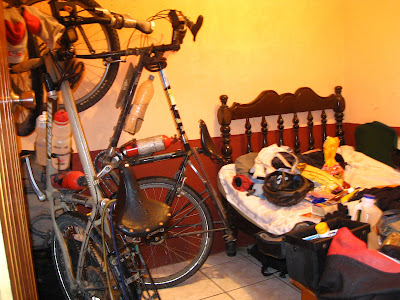 But bici touring is all about contrasts and Nahuela is definitely in contrast to the Guatemala we have seen so far. We make the short hop from the ridiculous to the sublime as we drop another near vertical 1000m down to the lake…. 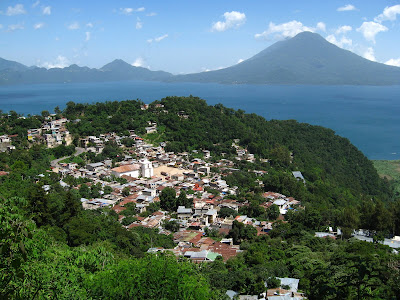  And find a hotel outside Panajachel doing a midweek bargain. We hit the private pool with lakeside view and contemplate how life has changed since last night.... 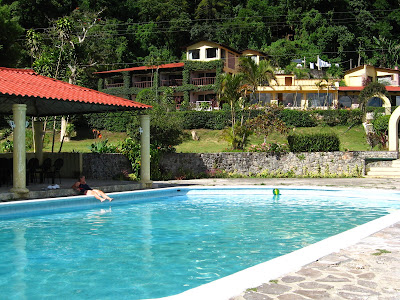 Posted by Sween in SAmerica at 8:42 PM

Just wondering if you are back in blighty? I don't know if Sue had to be back to start teaching again in September of if she's extended her sabatical?

If you are back, Ian Marsden's retiring and we're out on the lash on Friday 25th Septmeber around St Helens.

It would be good to catch up.

Thanks for the heads up - gets me thinking - Mmmmmmmm Beer! Been missing a proper pint for a while - just fizzy lager over here.

In theory, we should be back home, but as you know, theory is a tricksy beasty. Should be starting to look for jobs about now - that was the plan, but instead we're gonna roll on for another year (probably) we think.

Planning to be home sometime for Xmas (early December) until mid Jan before coming back to Guatemala.

How is Ian retiring - he's only about 27? Have a good session for him and say hi from me. Have to arrange another one when I get back.....

Your shares must be doing great to take another year out.


Defo give us a shout when you're back and we'll sort a cathcup out.

Hi, i just wanted to come here to let you know of a very cheap service that posts comments like this on millions of Wordpress blogs. Just why you might ask, well you may wish to sell something and target webmasters or simply just improve the amount of backlinks your web site has which will improve your Google rankins which will then bring your web site much more visitors and money. Take a fast look at this web site for more info. http://hellomotow.net/backlinks

Valuable info. Fortunate me I found your website by chance, and I am shocked why this coincidence didn't took place in advance!
I bookmarked it.

I have been surfing online greater than 3 hours today, yet
I never found any interesting article like yours.
It's beautiful value sufficient forr me. Personally, if
all web owners and bloggers made excellent content as you did, the web might be much more useful than ever before.