14th July to Aug 1st
After our night in Nahuela, we roll into Hotel Lago Vision Azul (Blue Lake Vision) just outside Panajachel and it’s a steal at 150 Quetzales a night - about $18. The owner’s are a Spanish brother and sister who cannot agree on how to manage the place and it’s been stagnating for a few years. Now the hotel is slightly rough around the edges and we meet Juan who has just gained power of attorney over the place. He’s come to check out the place personally and has got big plans. It won’t be this price for long - the hotel next door is $150 a night!
With this kind of view through the window it might just be worth it - but we would definitely not be here to enjoy it….
  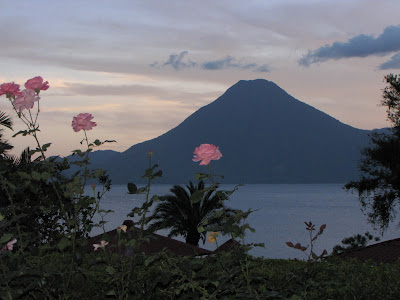 Lago Atitlan is just stunning! 100 square kilometres of beautiful blue water flanked to the south and west by 3 giant volcanoes - San Pedro, Atitlan and Toliman. They each rise to over 3000m and make a fantastic backdrop. The lake was formed after a cataclysmic eruption that caused this whole section of land to collapse. The lake sides are near vertical both above and below the water making the lake deep enough to scuba dive. It also creates some dramatic hiking!
We decide to stay a few days….
Just 100m up a dirt track is a nature reserve complete with zip lines that criss-cross a deep ravine and afford amazing views over the dense tree canopy and out over the lake. Even the hike up to the start is picturesque passing through thick green forest punctuated by waterfalls….
  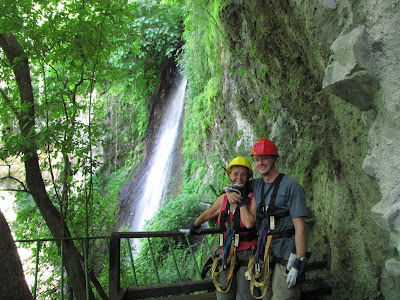 A viewing gallery gets you up close and personal with spider monkeys in their natural habitat. Sensing the proximity of humans, they seem to whisper behind closed hands to avoid being overheard….
  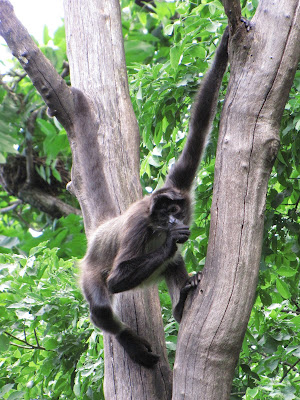 A family of Coatis - pass by directly below us, before the boldest one approaches for a closer inspection….
  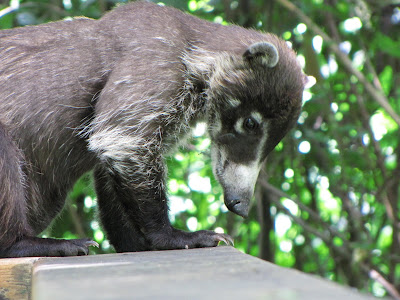 The reserve also houses a butterfly farm where the air flutters with colour….
  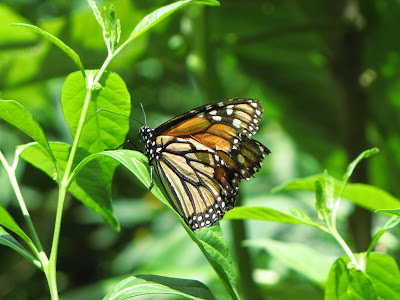 We waste the rest of our time in Panajachel just swimming in our private pool or watching golden sunsets that blaze a trail of fire across the water….
  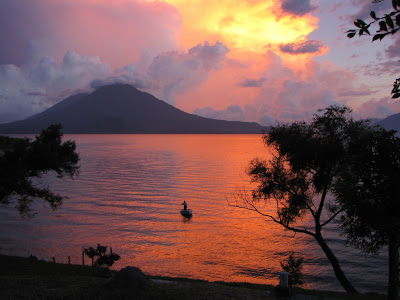 There are roads round the east side of the lake and broken tracks round the west, but unfortunately there are numerous reports of robberies and assaults on tourists away from the villages. It’s easier to take one of the frequent boat taxis across the lake and we catch one to San Marcos. Shifting a few sacks of corn and carrots makes way for the bikes and gear and we splash out into the lake. Dotted around the hillside are picture postcard cabins and villas built into the steep rock, each with boat docks for transportation. American retirees and rich Guatemalans have getaway homes here.
San Marcos is known as a the prettiest lakeside village nestled amongst banana, avocado and coffee plantations. It’s also renowned for it’s spiritual energy that attracts a certain hippie element. We arrive on the boat dock and every other building seems to offer treatment for problems of the metaphysical or the spiritual. It’s all a bit too zen for us cyclistas who require treatment of a more physical nature - usually provided less holistically and much more substantively by owners of bars and restaurants than owners of crystals and massage tables.
We cycle round the corner of the lake to the next village - San Pedro. Cycling around lakes is flat right? Wrong.... It’s a series of nasty little pinches, up and over mighty faults in the earth caused when all this land collapsed and folded during that eruption. It’s like riding over the outstretched fingers of a giant….
  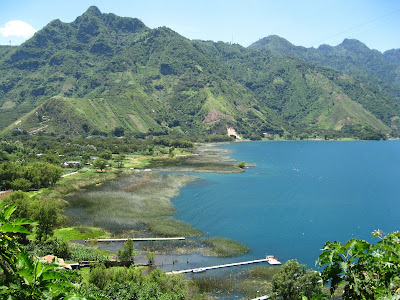 San Pedro is on the west of the lake where Panajachel is on the north east. Consequently our view point has changed dramatically and we sit directly beneath the great San Pedro volcano - thankfully now extinct. Now we are in cyclista heaven as all the artisans here are chefs. A central passage passing through the village contains an array of fantastic culinary offerings. There’s even a classy authentic French restaurant with awesome feeds for $5.
Yes - we are definitely a bit more San Pedro than San Marcos!
We sign up with a Spanish school for a week to give us time to sample all the restaurants. Lessons are up a hill in a manicured garden under palapas all with incredible lake views - as if we needed further incentive to stay….
  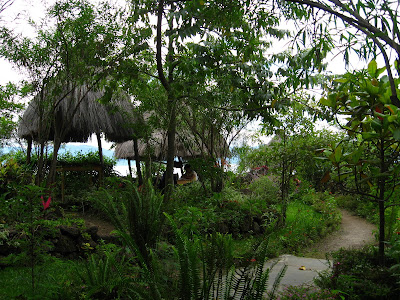 The school - ‘Cooperativa’ is involved in local projects to build community facilities and promote child education, with a portion of their fees going directly to fund these projects. Part of the classes involve video documentaries and talks by locals affected by recent war in the area and it’s more than just about learning Spanish. A link to their web site is above left at the top of this page.
Meanwhile, life goes on for the local Mayan community who use the lake for washing - personal and clothing…
  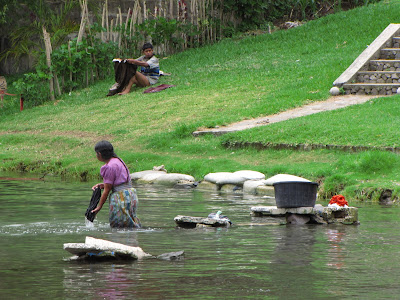 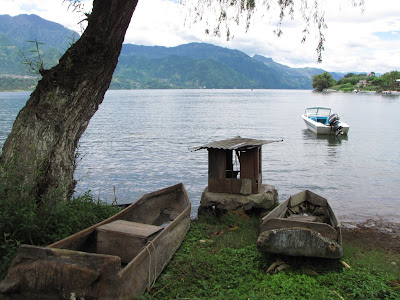 However evidence that everyday troubles do still simmer beneath the utopian veneer is revealed in a huge fire at a local hotel restaurant. Rumour has it that a disgruntled employee was sacked and returned to exact a terrible revenge. Apparently this is the second, and slightly more successful arson attempt as the fire rages and locals form a human chain and pass buckets of water whilst the volunteer fire unit is called out from neighbouring San Juan….
  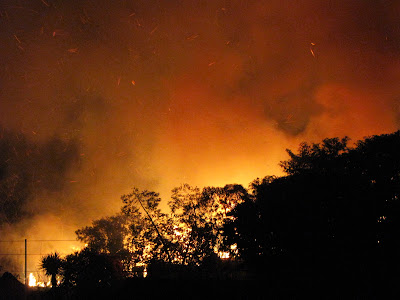 A couple of refugees from the burning building arrive where we are staying and explain how much worse it could have been as the dry tinber structure blazed away in short minutes. Fortunately no one was hurt and the next day reveals the sense of community here as the clearing up job is in full swing and the restaurant is set to re-open.
Posted by Sween in SAmerica at 12:36 PM