Aug 1st to 7th
To leave San Pedro de Atitlan we had planned to ride around the lake past it’s triumvirate of monster volcanoes and on to Antigua, the former capital of Guatemala. Unfortunately there have been a number of attacks on tourists recently on the very road we need to take and we are warned against riding. Yeah, yeah we think everyone gets a bit twitchy after minor incidents, but on asking around the response is surprisingly firm and constant. Do Not Go That Way! When a US army veteran recently retired to this area explains that even he takes a bus, we decide maybe the rumours are not exaggerated and we reluctantly agree to take the bus.
Apparently there is a group of bandits who make a living preying on tourists, robbing them at machete point before melting back into mountain terrain that makes them impossible to find. Every few months a group of vigilantes forms a posse and tries to hunt them down, with the result that they go to ground before reappearing in a new location somewhere else round the lake. It’s proper wild west stuff!
We just have to rationalise the bus ride is not cheating as the lake is a side trip and we will ride the route back from Antigua to the lake junction - all the miles will get ridden….
We have a few days to kill as Anna and Ali are set to return after Anna’s father’s funeral and we’re going to ride together again so we extend our stay in Antigua. Being the nation’s capital for 233 years until a massive quake levelled the city in 1773, Antigua has some fine old relics of buildings, many sadly now ruined. Others have been restored to former glory such as Iglesia de la Merced…. 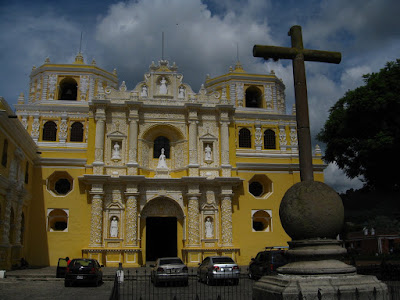 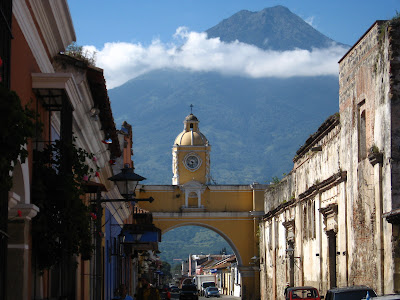 Close proximity to Guatemala’s new capital - the imaginatively named ‘Guatemala City’ ensures a regular flow of well healed weekenders and Antigua has more than it’s fair share of fine restaurants, swanky hotels and boutique shopping, sadly all beyond our modest budget. There are however enough cheap Chinese restaurants and back street bars to keep us interested.
And one of the volcanoes is still massively active - so we have to climb it!
Vulcan Pacaya erupts constantly and there are several flows of fiery hot lava coursing down it’s steep flanks. We’d be fools not to try and get as close as possible to something as dangerous as that!
It’s an organised tour, unfortunately as this is again rumoured to be bandit country and apparently it’s better to herd together under such circumstances. On the downside it does concentrate the wallets and cameras into profitably small spaces, but to counter that is the safety in numbers argument and the theory that you don’t have to outrun the bandit - just the slower tourists behind you. We’re pretty fit after all the cycling so we decide it’s good odds as we hike off across black ash fields into the gloom.... 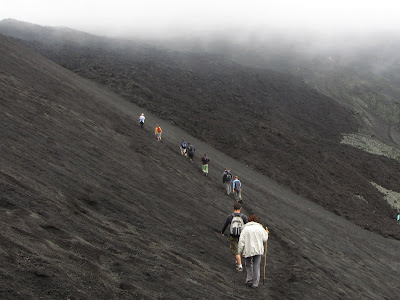 To the West are clear skies and the impressive sight of Vulcan de Fuego, another active cone coughing and spluttering into life…. 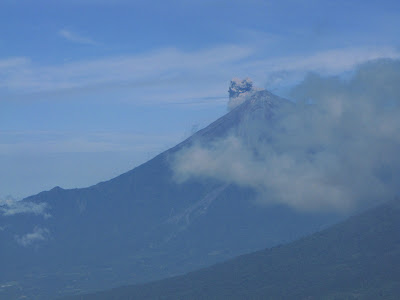 It’s a moderate 2 and a half hour hike up slippery pumice and ash before we reach the tortured summit of sharp, twisted rock. Hot sulphurous blasts of fetid air rise from the bowels of hidden underground vents….
  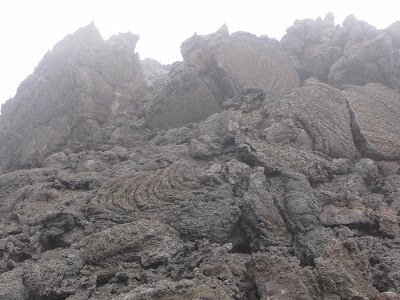  
Like the final scenes from ‘The Lord of the Rings’ we finally approach conveyor belts of super heated rock flowing from a fault in the blasted land. Note Sue’s walking stick ‘a la hobbit’ as she flees the intense heat of molten magma, selfishly spoiling an otherwise rather nice photograph…..
  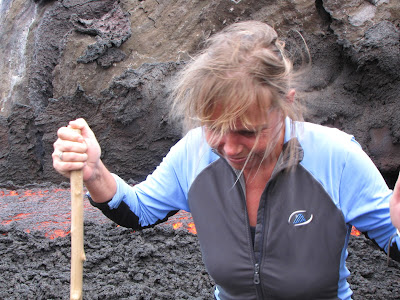 To be fair to her though, standing within 4 feet of lava is a tad on the warm side and I lose all the hairs on my legs in a swirling wind that raises the local air temperature to inferno levels. Wearing hiking shorts was not a wise decision with hind sight.
THIS IS LAVA…..
  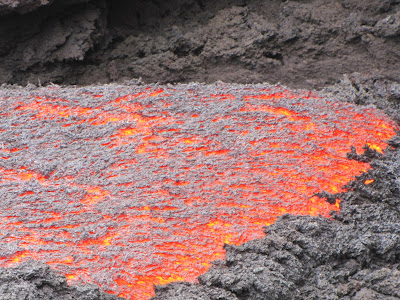 And this how close you get to it as it flows off the side of the mountain towards the distant valley below….   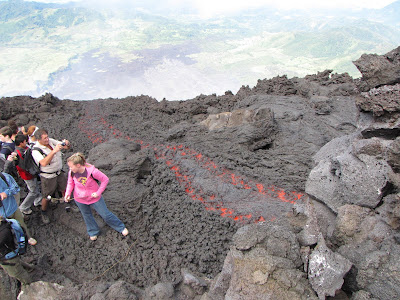 In less enlightened countries there would possibly be a barrier in place to stop accidental immolation, or maybe just a sign explaining that; like McDonalds coffee, lava can be hot and pouring it in your lap is not recommended….
To be fair to the safety nit pickers, the swirling gale force wind that blasts furnace like air in random directions and the crush of camera wielding tourists staggering and wheeling about on uncertain footing does cause one or two alarmed cries of ‘I say, could you possibly desist from nudging me towards certain death’....
Or somthing similar.
We retreat to a sensible distance and roast marshmallows….
  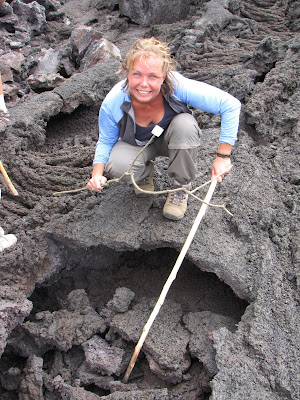 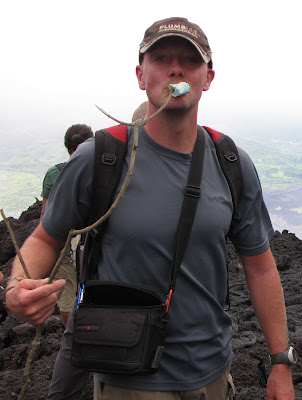 In Antigua we reside with Edwin - proprietor of ‘Guate Linda Language Centre and Hotel’ and all round fine fellow, whose excellent establishment can be viewed here. He’s a fantastic host and shows us the ropes around his town. What he doesn’t know is that we can hear the Spanish lessons taking place outside our bedroom window and we’ve spent the entire week getting free Spanish lessons….
Posted by Sween in SAmerica at 7:08 PM

A hublot bingo bango beerfest watch. if hublot was calling the prices, this replica watches sale price tag would have one more zero. Love their movements but hate the rest as a general rule. And this one totally replica watches uk outside of the movement finishing. Thanks for a brutally honest review David. But I do find it strange that you would assess such an interesting replica watches so negatively. To be frank, it much better than anything you have ever produced. However, to call vertical clutch disengagement any hublot replica sale of a second the accuracy of the rolex watches store is balderdash sir. The world is full of other watches. And I know that my watches have a niche appeal. The thing I always forget the date and I must have it in a watch. While the rolex replica sale side is good somehow all the gold is just too much. To quote a high class movie. I should be much more in love with but just am Not, and thisbis one of them. I love rolex watches store, especially bizarre ones. This one fits that bill. I love fine watchmaking. But there replica watches sale too many misses here for a proper love affair.