Sunday night is Cholita wrestling night!! About 20 of us from the hostal pile in to a minivan and take a one hour ride up to El Alto - La Paz's sister city perched 450 metres higher up on the side of a mountain. Not really knowing what to expect - we are not disappointed by a fun packed evening of the most cheesy spectacle so far on tour.

There are several bouts featuring sporting legends such as "The Colonel", "The Black Skeleton" and "Ninja Boliviana", each with their own special moves! 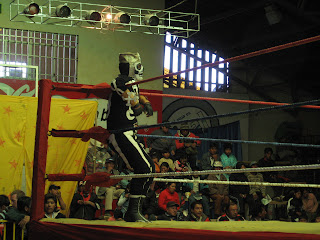 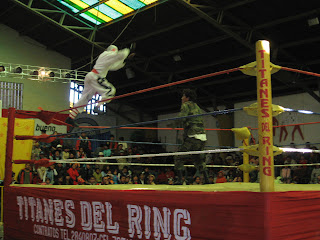 But everyone is here for the Cholitas. Cholitas are indigenous midgets! In a triumph of political incorrectness, a woman dressed in traditional wide skirt, bowler hat, colourful manta blanket and plaits enters the ring with her female midget similarly dressed. 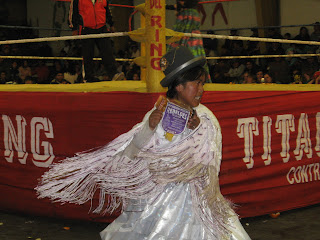 The 2 then wrestle male wrestlers who proceed to kick the cr@p out of them. 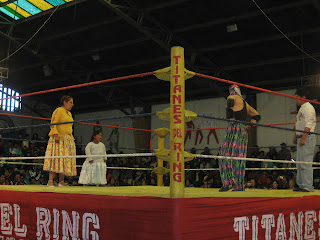 No holds barred - the referee gets involved with a few sly digs, and bodies fly out of the ring into the crowd. The locals love it. 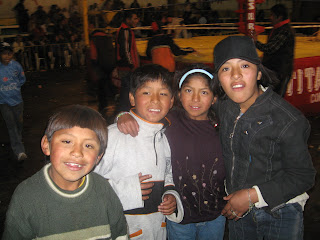 In true good versus evil comeback style, the cholitas always drag themselves improbably off the canvas to win through in the end as the crowd goes wild.

Even the BBC picked up on it...

It's a great (if slightly ridiculous) night out and a true antidote to political correctness gone mad at home....
Posted by Sween in SAmerica at 12:48 PM

Email ThisBlogThis!Share to TwitterShare to FacebookShare to Pinterest
Labels: Bolivia

I have received info on your blog because I signed onto the "Sween" word.. because on MY websited, I have lots of information on Castle Sween in Knapdale, Western Scotland. (www.knapdalepeople.com)

Anyway, because of you, I realized I can put up a tiny slide show via Picasa on the front page of the site. Thanks!
Heather

Good to hear the world of Sween is expanding and you have found my castle!!
When do you lower the drawbridge and sally forth on your cycle tour?
From your site it looks like the place needs some work though...
The Sween

Can anyone tell me where to subscribe this blog. I want to update good content for my blog: https://xuongmunon.blueseaco.vn