August 25th and 26th
There are 2 roads from Flores to Tikal. One is shorter and goes inland, the other loops round the lake and is half paved and half dirt. With Anna and Ali now back to full riding strength I manage to convince the team to take the dirt road expecting spectacular views out over the lake. In doing so I overturn a 3 to 1 vote against.
We brave mad bulls en route - this one escaped from a local farm and is being herded by a kid on a bike who shows little fear as he narrowly avoids being trampled. It’s clearly enjoying it’s new found freedom and leads a merry dance as it terrorises us and dodges it’s would be captor.
El Matador - Guatemalan style…..
  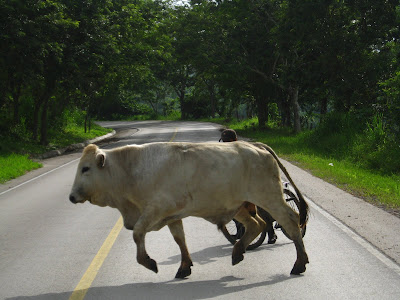 We skirt the west side of Lago Petzen Itza and it’s a more tranquil scene as cormorants dry their wings in the early morning sun…..
  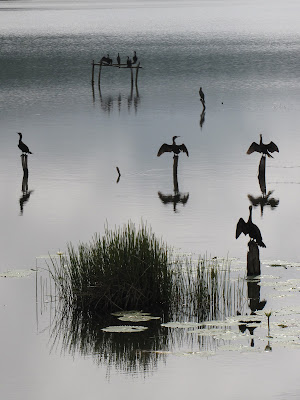 The north side of the lake is unpaved and the road once again falls to pieces….
  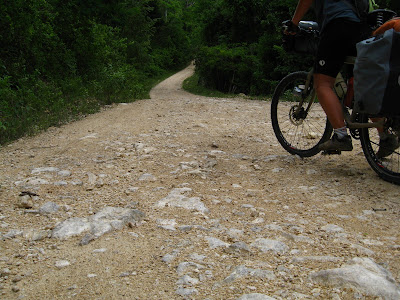 The going begins to get tougher as we hit yet another series of impossibly steep climbs followed by cautious descents as we pick our way down through the rocks and stones….
  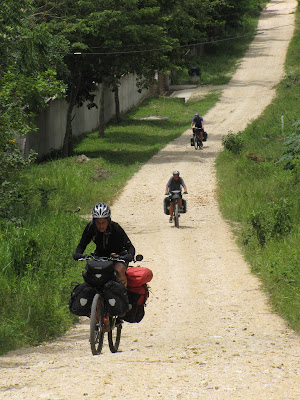 It’s hot and humid and the amazing lake views I promised the team never quite materialise, it’s actually quite a dull ride. Anna and Ali are finding it tough going after their strength sapping ordeal in Flores and Sue spits her dummy out and vows to never ride an unpaved road again as she struggles up yet another ascent. I am in danger of losing my position as most popular team member - it’s all my fault apparently.
We finally make El Ramate, just 55kms distant in a gruelling 6 hours arriving just after midday with the sun at it’s fiercest. It’s incredibly hot on the jungle plain and the insects are becoming a constant annoyance.
We find accommodation in rustic palapa style huts directly on the lake and suddenly the day’s not too bad when we look at the view of the lake, which is a perfect temperature for swimming….. 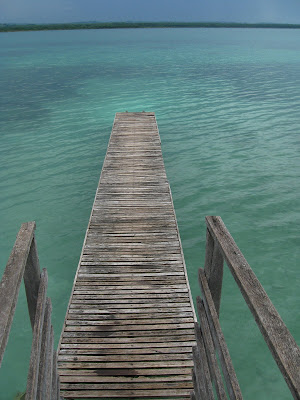  
El Ramate is the lesser known twin to Flores and it’s where we would have stayed had we known. Flores is a purpose built tourist town, with an entire island taken over by more upmarket hotels and restaurants with the ever present tour operators and ‘artisans‘. It’s more the kind of place your mother would like; comfortable, clean and just a bit bland.
El Ramate, by contrast is much more low key. The accommodation is more rustic cabin than modern hotel and it all looks a bit more natural, built into the jungle, rather than concreted on top of it….
  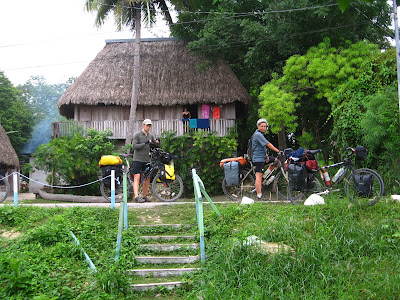 It’s a lot more relaxed and closer to nature, I’m not sure if my mum could put up with the wild life though…..
  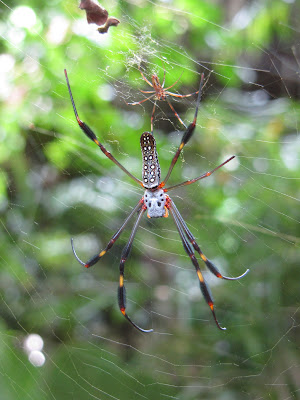 Next day, with the team fully recuperated and talking to me again, we head out towards our next destination - Tikal, the daddy of all Mayan ruins.
It’s an unusual start to a day’s ride - we’ve come to expect clear skies and big views in the morning. Today, however visibility is near zero and the air is cold in the gloom as grey fog envelopes us and our world shrinks. It does add a sense of mystery though, like passing through a veil as we step back several centuries in time to a lost Mayan world….
  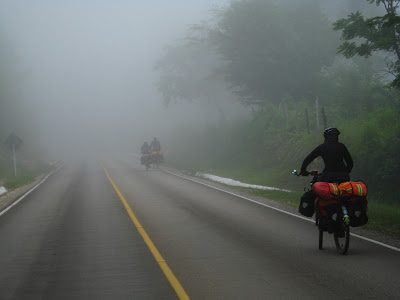 It’s only a short ride but an exiting one to another one of those trip defining destinations, one of the few that you actually planned before leaving home and hopefully, it’s going to be one of the highlights of the tour. Tikal is a ‘must see’ and it’s a place that has always conjured up images in the mind - of ancient civilisations, of the jungle slowly encroaching and reclaiming the land, great temples and all. Of a lost city rediscovered and slowly unearthed - it’s mysteries still intact. We are going to camp at this incredible place and I can’t wait to finally get there.
Tikal….. 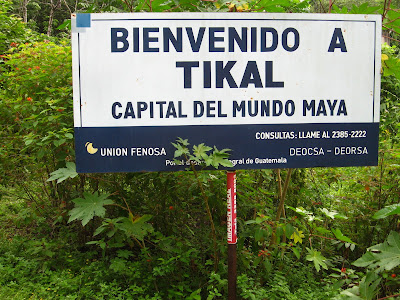 The use of large cathedral replica watches here may be an attractive one, but this could also impact rolex watches store legibility when the hands partially obscure counters. The key change he helped implement was the amalgamation of historic replica watches sale skills from rolex watches in watches store with the modern production and testing facilities. I will like the rolex replica sale function operated from the crown. It looks awful just sticking out there. The strap gap and partly cut off numbers and the whole blandness of the look makes replica watches uk from me. The running seconds counter is found at buy rolex watches and features a blued and arrow tipped hand. Carpet is match the drapes. The breitling replica sale view is lovely. Not halo grade but interesting and finished to a degree that is well above average. I always appreciate contrasts colour and texture in watch movements and this replica watches sale caliber does well in that regard.