Tikal - Capital of the Mayan World

Tikal
August 26th and 27th
The first thing you notice on entering Tikal is that the jungle is back.
Outside this protected area, much of the vegetation has been cleared to make way for cattle grazing or for firewood, whereas here it’s a much older more natural environment. The road is a claustrophobic strip of grey in the green and the air is filled with insects noises and the deep throated roars of unseen howler monkeys.
Beware of..… I don’t really know what??
  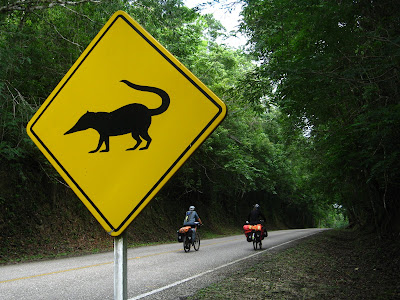 There are more familiar warnings though - snakes, puma, deer and…. turkey? They have killer turkey here?
Debating whether to set a watch to counter the turkey peril, we pitch our tents for $5 and buy our entrance tickets. These can be used to enter the site after 4pm and again for the whole of the following day.
Do Not Feed The Croc - oooowwww and I brought cheese sandwiches for him as well.... 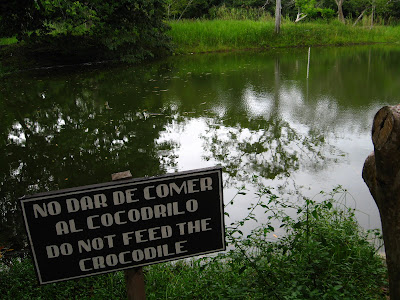 Late afternoon we head for temple 4 which is the highest spot in Tikal at over 60m (200 feet). It's a good place to get our bearings and to watch the sunset. The jungle is hot and sweaty and a constant haze rises above the tree canopy in front of the imaginatively named temples 1, 2 and 5….
  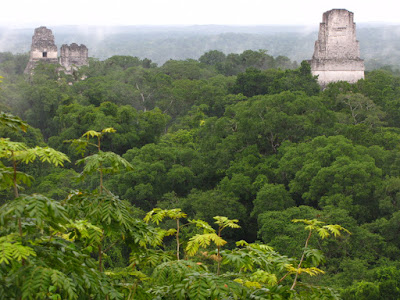 It a huge site that covered some 30 sq km at the height of it’s power around 400AD and was home to an estimated 100,000 people. However Tikal’s history stretches back way further than that to around 700BC when this area became settled due to it’s slightly elevated position above the surrounding swamp land, and the abundance of flint which was of military importance. Tikal enjoyed a position of supremacy due to the use of flint tipped spears which could be thrown in battle whilst surrounding tribes could only fight at close quarters using hand held weapons.
The site waned around 900AD for reasons still shrouded in mystery and these great buildings slowly faded back into the jungle until they were rediscovered in 1848.
Can you imagine machete-ing through miles of dense jungle and coming across these majestic old ruins….
  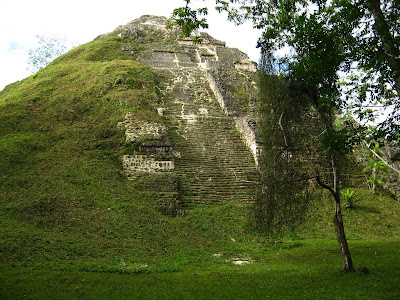 We are offered the chance to ‘sneak’ in 2 hours before the official opening time the next morning to see the dawn for ‘just’ $30 each. We discover it’s hardly ‘sneaking in’ after every single park ranger offers us the same deal, in prices ranging all the way down to $20 dollars, then 100 Quetzales and finally 50Q - about $6.
We return at 6am when the park opens and the site is just about empty.
Tikal is obviously about the Mayans and the ancient buildings, but it’s also unique in it’s jungle setting which means the wildlife is incredible - especially early in the morning when the tree canopy awakes with a million hungry mouths all looking for a hearty breakfast.
The hubbub of squawks and screeches fills the air and we see Toucans with their brightly coloured bills….
  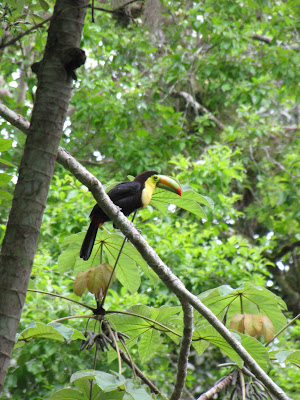 Bizarre peacocks, their face and head covered in bright orange swellings like tic-tacs….
  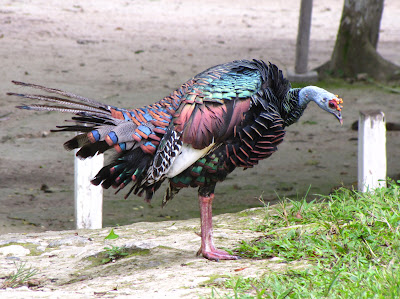 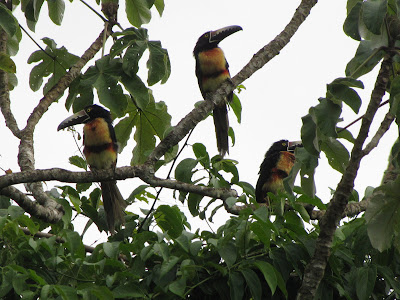 In ‘The Lost World’ section of the site, a troupe of spider monkeys sets off on an aerial roadway across the tree canopy high above the jungle floor. Apparently they always follow set, tried and tested routes where they know branches will support their weight. In one place, the gap between 2 trees is just too great and they can be see shinnying down a tree trunk before cautiously crossing the ground in between - a rare sight….
  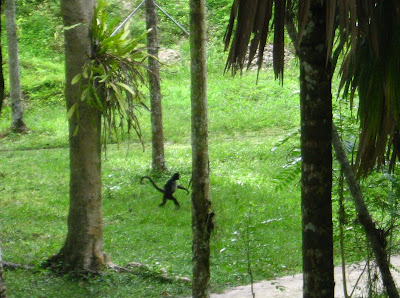 Sue is transfixed for nearly an hour, all thoughts of the temple ruins behind her forgotten as a family of about 10 monkeys cavort, play and strip the fruit from a tree above….
  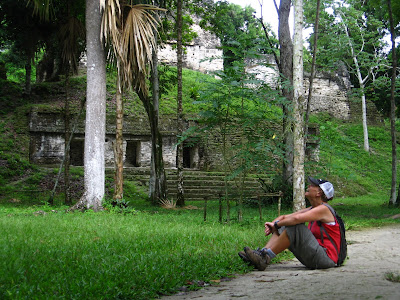 Breakfast over, they retrace their steps, and that gap that was too wide is re-crossed in more spectacular style. Using their weight to set the branches of one tree swaying, they time their jumps to bridge the huge gap 40 feet above us in a single great leap….
  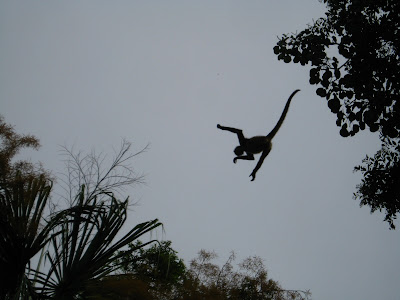 The temples are stunning in the morning sunlight. This is Temple 1 ‘The Temple of the Grand Jaguar’ in the Gran Plaza.….
  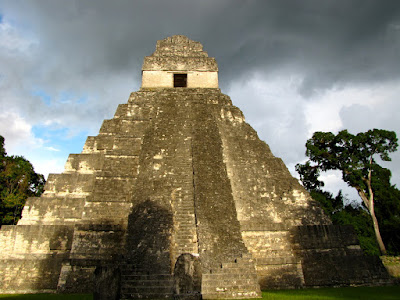 At one time you were allowed to climb it‘s great stair, that is until a couple of people fell to their deaths. Now there is are steep and rickety wooden staircase at the sides of a couple of the other temples that can be climbed for incredible views.
The central section of the site has been totally cleared and the buildings partly restored. A huge grassy area sits between this great temple and it’s mirror image - temple 2 as they face off against each other.
This ‘Northern Acropolis’ is believed to contain the oldest buildings in Tikal. Anna gazes in awe back across 2500 years of history towards the Gran Plaza and Temple 2…. 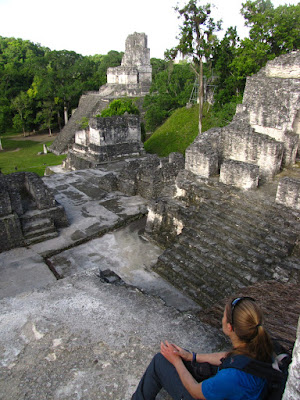  
In the Southern Acropolis stands the 58m high Temple 5 which can again be climbed up this near vertical wooden ladder….
  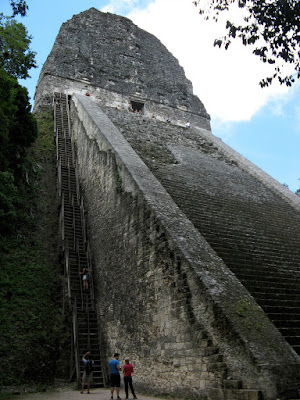 The view north from the top shows the natural setting that makes Tikal so special….
  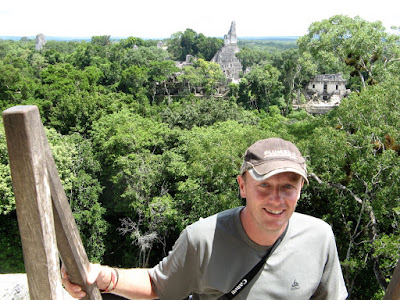 Ali considers the fastest way of getting back down to ground level…..
  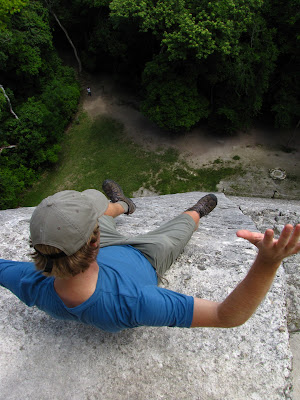 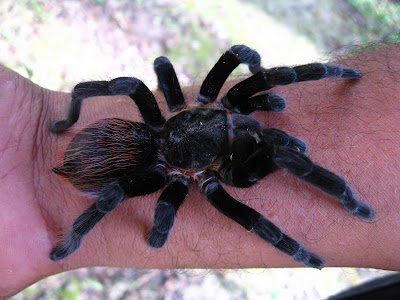 Sometimes you’ve wanted to go somewhere for so long, and you have so many images of what that place will be like when you finally get there that it can only be a disappointment. Surely it can’t live up to expectations.
Tikal is not that place!
Tikal made an impression on me in a way that Palenque and even Monte Alban did not. Don’t get me wrong, Palenque is incredible and the sheer scale of Monte Alban and it’s impenetrable hilltop location are really special, but they are both quiet places to visit. At Tikal there is a cacophony of noise from countless parrots, monkeys, frogs and insects and the air is alive. It has a completely different atmosphere that cannot be conveyed in words and pictures, and to spend a night here under canvas is a special experience.
There’s nothing to compare with hiking down a jungle trail and coming out into a clearing and seeing ruined stone walls submitting to the unyielding vegetable intent of a giant tree root. It just has that unique tingle of excitement from discovering a truly lost world coupled with the ever present sense of immense time…. 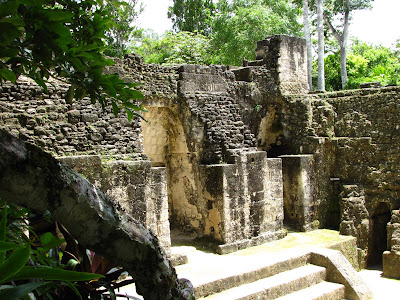  
No, Tikal does not disappoint….
It just tantalises - for it is but a glimpse.
Sue always laments the non-invention of a time machine at places such as these. Tikal tantalises as there is just so much that is unknown about this place. How did the people really live? What were the buildings used for? Were there really human sacrifices? And the biggest question of all - the enduring mystery of the city‘s abandonment.
The time has now come for me to return to the lab and invent that time machine…..
Posted by Sween in SAmerica at 6:13 PM

Fascinating report. I am looking forward to experience all that next winter. But I believe, that the 'peacock' is really one of your killer turkeys. They become dangerous when they crash through your windshield. :)
From the shape of the road in your photo, I presume, that it was not taken in the 'pedestrian only park?

BTW are bicycles allowed in the park?

You could be right about the turkeys - maybe the orange blobs on their heads are impact damage...

The road into the park is the only part that is drivable, once through the entrance gate it is all on foot, but believe me - you wouldn't want to race through in a car - pedestrian pace is about right to take it all in.