May 2nd to 5th  2009
The media drops stories concerning swine flu to cover the more pressing issue of a Coronation Street actor who has had a car accident. From this we conclude the flu threat is less serious than we were lead to believe and decide not to cancel the tour. We leave Puebla and head for our next destination Oaxaca (Wa-ha-ca) after a full 10 days off the bikes.
It’s my excuse for losing the race to this guy. He must be 60, but he sure was determined and the race lasted nearly 10kms with the lead changing many times before he pulled away on a hill…
  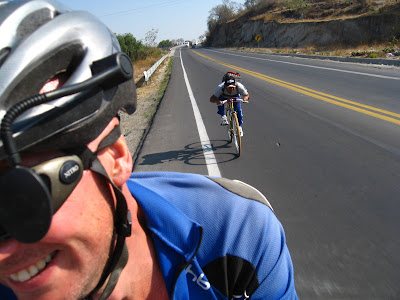 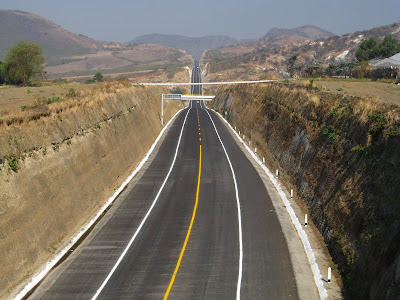 Mexican toll roads are prohibitively expensive to the average driver with charges every 50kms or so costing around 6 dollars! I guess that’s the reason for the lack of traffic and it’s a shame we are often turned away from this perilous alternative. Not only is the wide shoulder great to ride on, but these roads tend to be a lot flatter than the free roads.
10 days off the bikes seems to have affected our planning as we foolishly pass up the opportunity of a hotel after 75kms (50 miles). It turns out to be the last one for another 45kms and the heat and the gradient both start to rise brutally at this point. At 5pm we manage to find a room above a local village bar in Tehuitzingo just as it’s getting into full swing on a Saturday night. Daytime temperatures are becoming a serious factor and riding after midday is now a strength sapping ordeal. Despite the party below, we crash wearily into a deep, deep sleep.
But the damage has been done and the next day, our heavy legs struggle to propel us a mere 45kms further over some gently rolling terrain, before we throw in the towel and splash out for an air conditioned room for some serious recuperation. Acatlan has an open air market and we gorge on a whole roast chicken and pounds of locally grown fruit to rebuild our strength.
Recovered, we hit the road early and sight a familiar shape way off in the distance…
  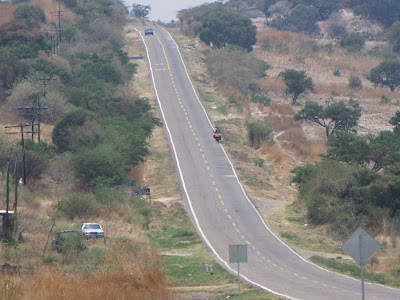 I take off in hot pursuit and ride down another couple of cyclistas, Anna and Alistair, a Dutch and Australian couple riding from Alaska to Tierra del Fuego at the Southern tip of Argentina. For the first time since Los Angeles we have company and we ride in a pack. Great company, and then the terrain starts to improve markedly as well. Huge bends sweep round stratified hillsides as we attack the next range after Huajuapan de Leon….
  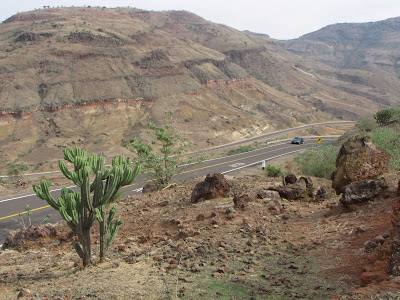 Then the land starts to break up into soft sand-stone arroyos, weathered and cracked after the seasonal gyration from torrential rain to baking sun and back again….
  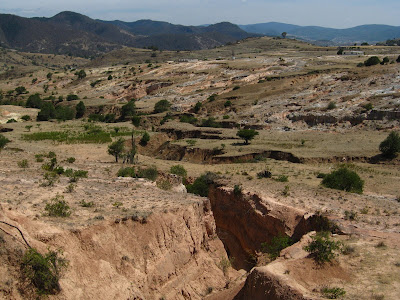 It makes a stunning backdrop as we sweep through this alien landscape….
  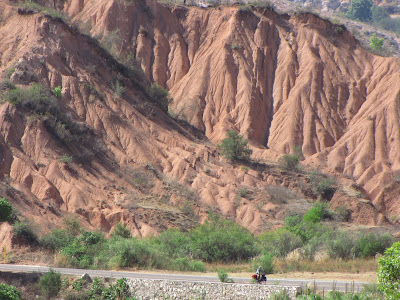 Sue and Anna ride on as I admire yet another huge mountain vista….
  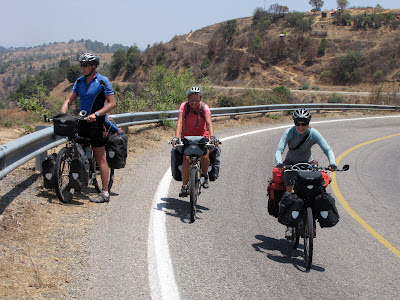 Lunch stop. Sometimes you’re limited to what you can get on the road, but a cyclista takes whatever he can get. Canned sardine in salsa with refried beans in a bright blue(?) tortilla. Delicious….
  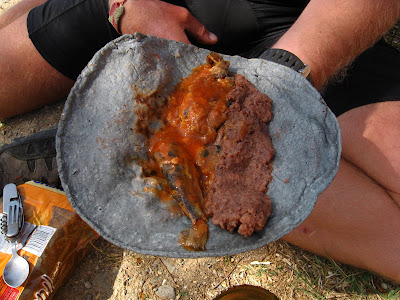 After lunch it all gets a but much for Sue, who finds time for a little snooze at the roadside. This girl can sleep anywhere….
  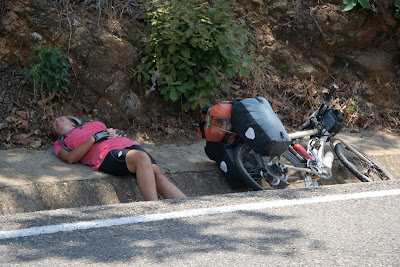 Oaxaca state is the 2nd poorest in Mexico and it’s economy is more rural than other states we have passed through. We stop in Huitzo just outside Oaxaca and this is becoming a common sight….
  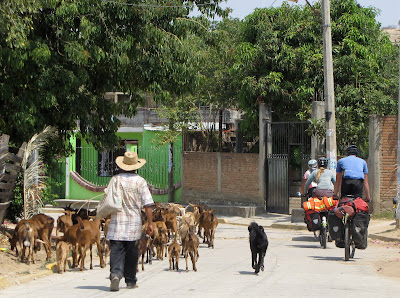 The next day is a short morning ride into Oaxaca city after 3 days of great riding with Anna and Ali. Thanks guys, we had a lot of fun….
Posted by Sween in SAmerica at 3:04 PM

Every time I read your blog, it's like I'm going on a trip. You are a very creative person and a talented writer. In my review apps blog, I try to be as interesting to readers as you are.