March 31st to April 2nd
After a couple of days off the bikes spent exploring Colima's fake colonial style buildings - the real ones having long since been demolished by earthquakes, we feel refreshed enough to leave the city. Skirting the last tendrils of the mountain range, we drop the last few hundred metres off the land to the edge of Mexico.... 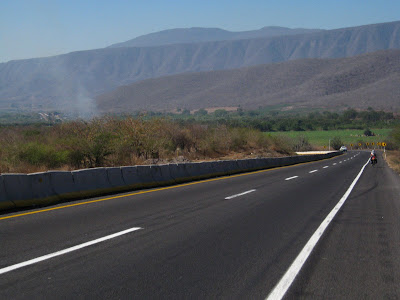 The temperature rises; it's rapidly approaching the warmer days of summer now, something we've been shielded from at loftier altitudes in the sierras and it's way hotter than we're used to. I get a puncture amongst the frequent pieces of tyre shrapnel lying on the road's shoulder, their soft rubber hiding lethal shards of steel binding, and run rivulets of sweat as I replace the tube. Oblivious, Sue rides on for several kilometers before realising I am no longer with her. To assuage her worry, she finds a taco stand and gorges on carnitas and fresh mangos.
And then we are amongst coconut plantations!
As far as the eye can see..... rank and file of symmetrically planted trees march off in ever decreasing size into the distance 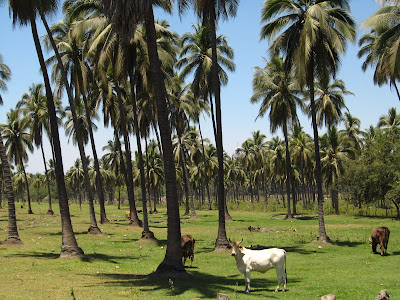 I never knew coconut trees were so prolific. Each tree sports up to 50ish large green football sized fruits, hidden amongst the palm leaves some 20 metres overhead. That's a lot of coconuts mutiplied by a lot of trees, running mile after mile along the highway. It's no surprise then then we start to encounter road side vendors, each with a pickup truck weighed down with produce. 15 pesos (less than a dollar) buys 2 from a machete wielding salesman, who hacks the top off the nut and produces a straw with a flourish. There's about a litre of milk inside and it's delicious. Neatly slicing the drained fruit in 2 and carving a spoon from the woody case, we eat the flesh which is so fresh it is soft and spongy - excellent snack food for passing cyclists.
We finally start to smell the ocean and the road turns, running parallel to it. Several tracks disappear off to the side in search of hidden beaches. At Boca de Apiza we take one and ride 3 miles through banana plantations before once again reaching the sea.
The Pacific Ocean!
It's the first time we've seen it since Northern Baja last December and we've got it to ourselves - this beach paradise is totally deserted. Camping Robinson Crusoe style.... 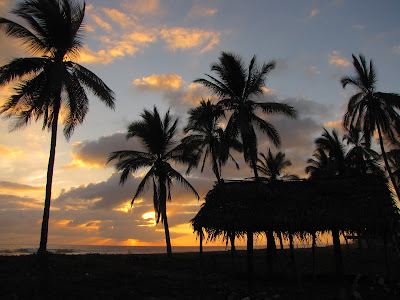 The next days ride is simply gorgeous and such a contrast from the austere mountain beauty we have grown accustomed to. Now the senses are assaulted.
Sight -  just so much greenery, vegetation everywhere, mangos, bananas, coconut and papaya.
Smell - the scent of the ocean and all that verdancy, the air is heady.
Sound - a cacophany of buzzing cicades and bird screeches, an aural battering ram. 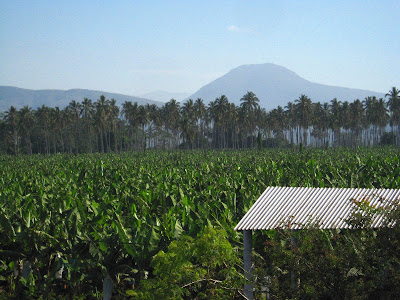 We leave Colima state and enter Michoacan, reputedly one of Mexico's most beautiful. At a tiny, undiscovered beach town of Maruata we find a restaurant with a view and consider the fish menu.... 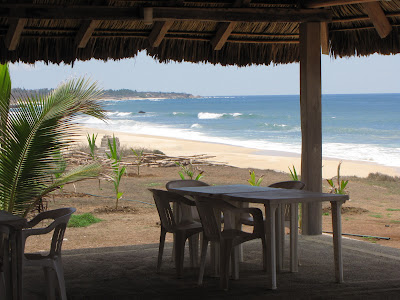 The next days ride is tough as the road turns in land for a while. Highway 200, so called because of all the 200 metre climbs up and over the fingers of the mountains as they reach and dip into the cooling water. We get occasional glimses of rocky beaches below as the road rides high above them.... 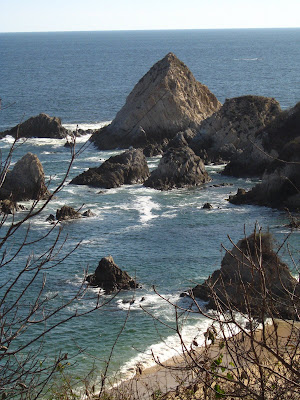 Next week is Santa Semana, a huge Mexican holiday where hoards of city dwellers evacuate the hot choked city streets and hit the beaches. In the lull before the storm I negotiate my way into an amazing beach cabin for under 15 dollars; ocean view, private bar, pool the works, and completely empty. 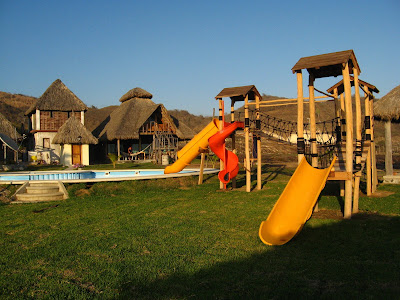 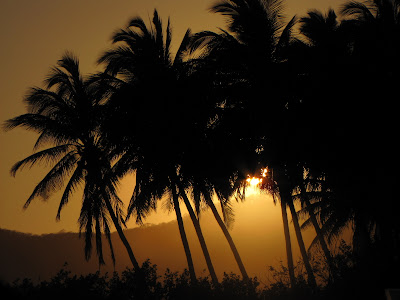 Posted by Sween in SAmerica at 1:37 PM

Those photos look like Hawaii. Are you sure you haven't been doing any underwater cycling? ;-)

This boy gets about...

No I promise it's still Mexico. sounds like I need to get to Hawaii though if it looks like this.

Sorry we're going to miss you when you make your trip to the UK, it would have been great to see you. Planning a trip to Puerta Vallarta anytime soon? We could meet there....