Sunday 23rd.
Not only has the bike arrived - it´s all in one piece as well. After reassembly I just had to get the wheels spinning to test it out, so Mick and I set off for Tigre which is a small town a few miles out of BA that has a nice riverfront. It just felt great to finally ride in South America, even if it was a bit tame compared with what´s to come..... Cleared the hang over though. And you can get boat crossings to Uruguay much cheaper than from BA - an option I´ll persue (time permitting) at the end of the trip.

Monday 24th
Spent another day just loafing round BA. I´m starting to really like the city; now I´m getting used to the scale of the place. It stretches for miles, and some of the avenues are 14 lanes of traffic wide and take some crossing with bikes and taxis seeming to come out of nowhere - I am the frog in the old "Frogger" video game.

There is no real heart to the city like say a London or Barcelona and there are not there same must see attractions either, but it´s just got a great feel to the place. I´d read words to describe Porteños (BA residents) like "spoiled", "arrogant" and "egotistical", but if it´s true I never experienced it, only a relaxed friendliness that you certainly don´t find in London. 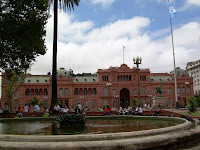 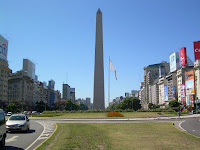 Thats ok comparing to London and all but what about versus the city at the center of the universe?!

More importantly, how is the beer situation down there?

Obviously sunny St Helens leaves it in the dust - you know that goes without saying.

As for Cerveza - forget it. Wine rules out here, serious bottles for no money. Spend 3 quid for quality. 5 quid is just spraying it around. Salud.