The Ride to the Salar

Wow! The road gets even worse... Bumps that rattle the teeth... 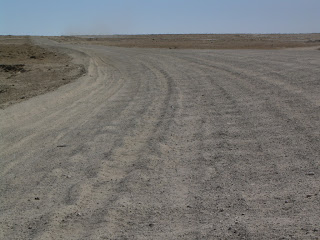 A passing 4x4 disappears in to the dust it throws up - 2 pictures taken just a second apart. We eat dust... 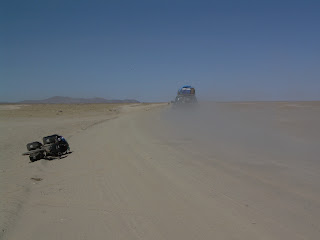 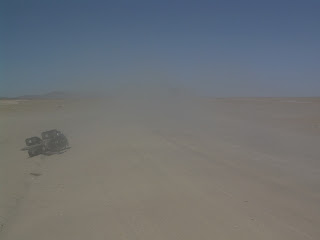 Mercifully there are only 23 kms before we pass through another railway town, Colchani, and arrive at the edge of the Salar where salt is being harvested on to trucks... 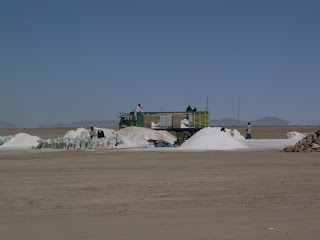 * The salt lake formed was originally Lake Minchin which dried out 40000 years ago
* It´s the biggest in the world - 10582 kilometers square which is huge!!
* It´s high - 3660 metres in altitude.
* It contains 10 billion tonnes of salt. A lot!
* 25,000 tonnes are harvested annually, meaning there are only 400,000 years worth left - better visit soon!
* They calibrate satellites using the surface cos it´s flat.
* Very flat - it varies by half a metre over the whole surface!
* It contains around 30 "islands"
* If you lick it - it tastes salty.

We ride 80kms across a vast white sparkling desert, the sun a million crystaline reflections thrown back at us. The land looks like it´s covered in a blanket of snow. It´s surreal and totally beautiful... 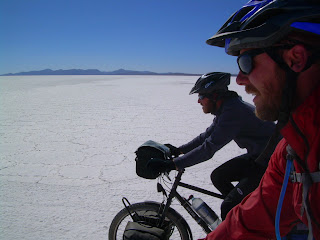 Distances are impossible to estimate. The island appears and we cycle another 40kms; 2 hours towards it without it´s aspect changing. It´s a mind game! 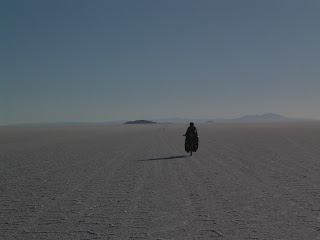 And it´s freezing. The wind blows unhindered across the nothing and faces and hands numb. We finally reach Isla Incahuasi as the sun is setting and the heat is rapidly draining from the air.

A priviledge of not taking a tour jeep here and arriving by bike is that you are allowed to stay on the island. For 20 bolivianos (1 pound 30 pence) you get a place in a cabin and the chance to wake there and watch a sunrise, something most of the tourists miss out on.

There´s also a guest book that cyclistas can sign, and I find an entry made by Rob Hickman of Llanelli South Wales who I met in a Welsh pub. He was the man who inspired me to come to this amazing place... Rob you were more than right!!! Thanks a bunch... 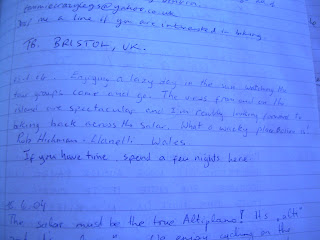 And it´s strange to find other entries from people I know only from chance meetings on the road. Legends of cycling:-
Tyson Minck met in Ushuaia
Ulli and Jose met in Bariloche and again in Santiago
Rob Paine met in Puerto Natales
plus names of other cyclists I have heard of on the trip. Small world!! 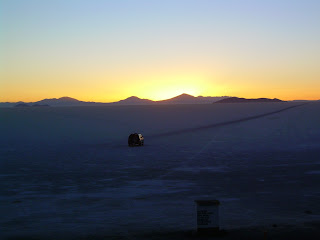 the crazy adventures continue in Boliva

corregation, salt, altitude and cold .. i don't envy you :)

good to hear from you again Em. Thought you were somewhere on the Altiplano as well... or is it jungle fever now??

Colds not so bad - just wearing 4 shirts in the sleeping bag to avoid freezing to death :)